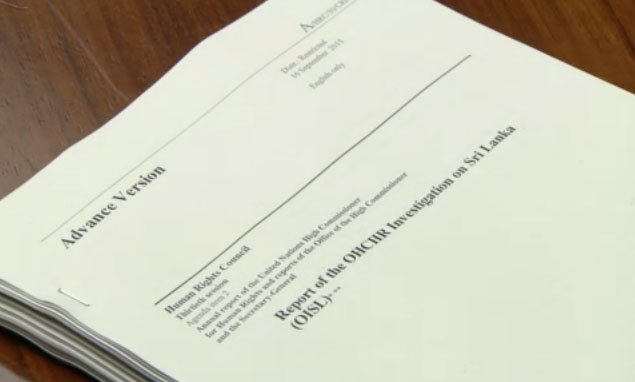 The long-anticipated report of the United Nations investigation into allegations of human rights violations during the war in Sri Lanka was released a short while ago.

Zeid Ra’ad Al Hussein, the UN high commissioner for human rights, unveiled the report on war crimes and atrocities during a press conference at the Palais des Nations in Geneva on Wednesday morning.

The report was commissioned under a 2014 resolution drafted by the United States and strongly backed by Britain while the former government under Mahinda Rajapaksa had refused to co-operate with the international community.

But the diplomatic atmosphere has changed dramatically since President Maithripala Sirisena assumed office and Washington and London have made clear that they will work with the new government when a follow-up resolution is placed before this session of the human rights council.

Mr Zeid threw some light on the contents of the report when he delivered his opening remarks to the council on Monday.

The report contained “findings of a most serious nature,” he said. “This council owes it to Sri Lankans and to its own credibility, to ensure an accountability process that produces results decisiveness, moves beyond the failures of the past and brings the deep institutional changes needed to guarantee non recurrence.”

Mangala Samaraweera, the foreign minister, made his government’s pitch to the Human Rights Council in Geneva this week as he outlined its three-pronged proposals for justice and reconciliation.

He said Sri Lanka would establish a truth and reconciliation commission modelled on most-apartheid South Africa; an office for missing persons backed by the International Committee of the Red Cross (ICRC); and a judicial mechanism with a special prosecutor and assistance from international bodies.

Mr Samaraweera cited South Africa’s policy of tackling its apartheid era through a truth a reconciliation commission rather than criminal trials when he addressed the council.

“I say to the sceptics: don’t judge us by the broken promises, experiences and U-turns of the past,” he said. “Let us …not be held back by the fears and prejudices of the past. Let us not be afraid to dream.

“Let us not be afraid to engage in meaningful dialogue aimed at finding solutions to problems as opposed to pointing fingers, heaping blame and scoring political points at the expense of future generations.”

However, the Sirisena government seems to set to win international backing for its proposals. A US-drafted resolution that will be tabled in Geneva later this month, is widely expected to endorse Colombo’s three-tier blueprint.

Britain and America have already offered to assist the Sri Lankan government to implement the recommendations of the UN investigation.

TAGS :  UNHRC ,  Sri Lanka ,  human rights ,  UN ,  Zeid Raad Al Hussein ,  Geneva ,
Disclaimer: All the comments will be moderated by the AD editorial. Abstain from posting comments that are obscene, defamatory or slanderous. Please avoid outside hyperlinks inside the comment and avoid typing all capitalized comments. Help us delete comments that do not follow these guidelines by flagging them(mouse over a comment and click the flag icon on the right side). Do use these forums to voice your opinions and create healthy discourse.