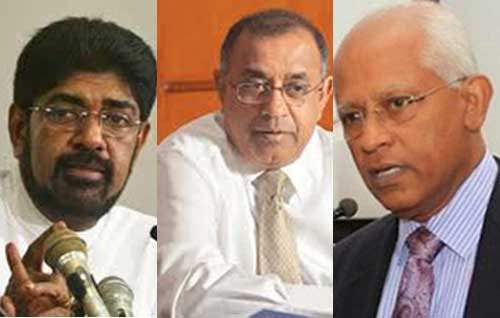 They arrived at the Presidential Commission of Inquiry (CoI) appointed to investigate serious acts of fraud, corruption and abuse of power, state resources, and privileges for questioning, its secretary Lesil de Silva said.

The commission is investigating a complaint alleging that a certain state-owned media institution had incurred losses amounting to Rs 200 million due to the broadcast of the former President’s adverts without payments and refraining to air Maithripala Sirisena’s paid adverts during the presidential race.

It is said that payments obtained from Maithripala Sirisena’s campaign were returned without his adverts aired.

TAGS :  CoI ,  Maithripala Sirisena ,  Keheliya Rambukwella ,  P.B. Jayasundera ,  Lalith Weerathunga ,
Disclaimer: All the comments will be moderated by the AD editorial. Abstain from posting comments that are obscene, defamatory or slanderous. Please avoid outside hyperlinks inside the comment and avoid typing all capitalized comments. Help us delete comments that do not follow these guidelines by flagging them(mouse over a comment and click the flag icon on the right side). Do use these forums to voice your opinions and create healthy discourse.