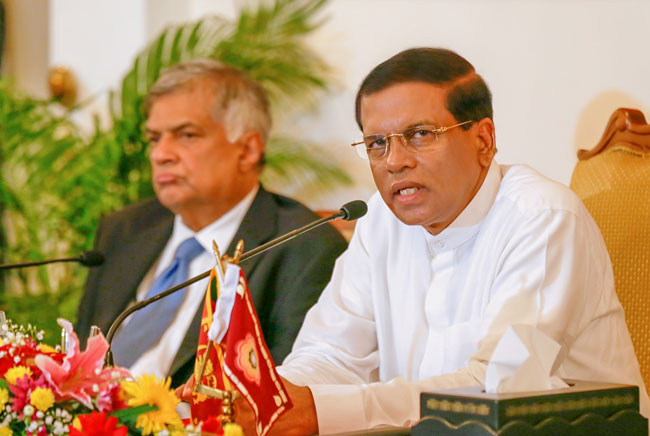 The President and the Prime Minister have yet again assured that discussions on a trade agreement entitled Comprehensive Economic Partnership Agreement (CEPA) were not held during PM’s visit to India.

President Maithripala Sirisena and Prime Minister Ranil Wickremesingh stressed the point while addressing heads of media establishments and editors of newspapers and electronic media at the President’s House today (September 18).

The PM urged the media to act with impartiality before expressing views.

He said some newspapers had written editorials and carried advertisements stating that the Prime Minister would enter into a Comprehensive Economic Partnership Agreement (CEPA) during his tour of India. He said that he did not even discuss such an agreement.

President Sirisena said the international would have insisted on hard strictures and conditions on Sri Lanka in the Report of the United Nations High Commissioner for Human Rights, if not for the change of government in Presidential Election of January 8 this year.

The indications were that the UN body would have named some people as perpetrators of human rights violations and barred them from travelling abroad and impose other sanctions; he said and added that the positive steps taken by the government helped to reverse that trend.

The international community is satisfied with the actions taken by the government towards restoration of rights, media freedom, good governance and other positive steps of the new government and it has positively reflected in the UNHRC Report, he said.

President Sirisena said if there was no change of government, the Report would have posed severe difficulties to the country.

TAGS :  Prime Minister Ranil Wickramasinghe ,  Prime Minister ,  Ranil Wickramasinghe ,  India ,  Modi ,  CEPA ,
Disclaimer: All the comments will be moderated by the AD editorial. Abstain from posting comments that are obscene, defamatory or slanderous. Please avoid outside hyperlinks inside the comment and avoid typing all capitalized comments. Help us delete comments that do not follow these guidelines by flagging them(mouse over a comment and click the flag icon on the right side). Do use these forums to voice your opinions and create healthy discourse.