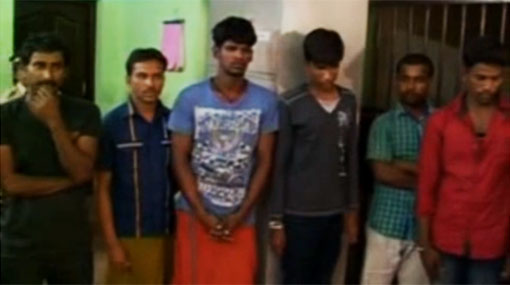 Nine Sri Lankan refugees from various camps in Tamil Nadu and four local agents were arrested at Munambam, from where they were to be ferried to the Australian coast by a fishing boat.

Police have also seized the vessel. Police sources said the arrested refugees, all men in the 18-30 years age group, had been staying at various camps in Tamil Nadu.

“Most of them don’t know one another. They reached Munambam coast a few days ago and were staying in various lodges,’’ they said.

Sources said each refugee had paid Rs 1 lakh as advance to the agents — two from Kerala and two from Tamil Nadu.

On boarding the boat, each refugee was supposed to hand over Rs 50,000 more to the agents. Police said the agents had selected Munambam considering the availability of fishing boats in the region.

“They had chosen a boat costing Rs 7.15 lakh and had paid an advance of Rs 15,000. However, the boat owner was not involved in the racket as sale of fishing boats is normal in the region. The 55-feet-long boat has the capacity to carry more persons. Hence, we suspect the agents would have brought in more refugees if the racket was not busted,’’ sources said.

Police said the refugees were told that they would reach the Australian coast after a voyage of 16 days. They were convinced that they would have to stay in jail only for a short period after which they could apply for citizenship.

TAGS :  human trafficking ,  Kerala ,  Sri Lankan refugees ,  Munambam ,  TN ,  Australia ,
Disclaimer: All the comments will be moderated by the AD editorial. Abstain from posting comments that are obscene, defamatory or slanderous. Please avoid outside hyperlinks inside the comment and avoid typing all capitalized comments. Help us delete comments that do not follow these guidelines by flagging them(mouse over a comment and click the flag icon on the right side). Do use these forums to voice your opinions and create healthy discourse.