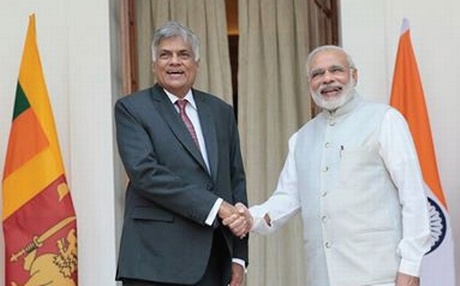 With a friendlier government now at the helm in Colombo, India has revived its plan to develop a port in Sri Lanka, hoping to catch up with the Chinese, the New India Express news agency reported today.

So far, India had been biding its time on putting pressure on Colombo to complete the strategically-located Kankesanthurai (KKS) port in the Jaffna peninsula.

With last month’s parliamentary elections reinforcing that the result of the January presidential polls was not a fluke, India brought up the stalled port project during Sri Lankan Prime Minister Ranil Wickremesinghe’s visit to India.

It is learnt that India raised the issue of rehabilitation of KKS harbour during the delegation-level meeting led by the two prime ministers. Wickremesinghe sounded positive and said that Sri Lanka “will collaborate” with India for the development of the key northern harbor, according to sources.

This is a key commitment to kick-starting pending projects with a more responsive Colombo.

India had signed the agreement for rehabilitation of Kankesanthurai Harbour in 2011, which was supposed to have been completed in six stages within two-and-a-half years. It would involve building a new port as the existing one was unusable after being attacked by LTTE during the last few years of the civil war.

India had completed the first four phases by 2013, with the removal of six sunken vessels, at a grant of $19.5 million. The first three phases were a preliminary hydrographic survey, dredging and geotechnical investigation and preparation of detailed project report by RITES.

Based on the detailed project report, India would have extended a line of credit to Sri Lanka to complete the work for rehabilitating breakwater, building an additional pier and installing port infrastructure facilities.
But, the fifth phase never happened. “Everything takes place in a certain political context. “The Sri Lankans were delaying the building of the pier.

They kept on dragging their feet,” said an official, indicating that troubled relations with the earlier Mahinda Rajapaksa government had hindered the project.

In the meantime, China continued to go strength-to-strength under the patronage, investing in road and power plants, building Hambantota port and starting the ambitious Colombo port city project. Rajapaksa had justified handing over Hambantota to the Chinese for development, claiming that India had refused his offer when approached first, as the Indian public sector was dubious about its economic viability.

The surprise victory of Sirisena in the January 8 presidential elections, which had been called early by a confident Rajapaksa, upset Chinese calculations. China’s Colombo port city project is currently suspended, while other projects awarded during by previous Sri Lankan government are under review.

Sensing that this was an opportune moment to push for removing the cobwebs from the harbour project, India moved ahead during Wickremesinghe’s first official foreign visit as prime minister.

Once developed, KKS would be the closest Sri Lankan harbour to ports in the eastern coast of India, Myanmar and Bangladesh, transforming Sri Lanka’s northern province into a regional marine hub. “This will also foster more economic activity between Tamil Nadu and the Sri Lankan north, which is definitely also a political goal,” said an official.

Also, the development of Sittwe port in Myanmar by India is in its final leg. Bangladesh has also agreed to allow India access to Chittagong and Mongla ports, and work in Iran’s Chabahar port has gathered momentum following the nuclear deal. (Courtasy -- New Indian Express)

TAGS :  Prime Minister Ranil Wickramasinghe ,  Prime Minister ,  Ranil Wickramasinghe ,  India ,
Disclaimer: All the comments will be moderated by the AD editorial. Abstain from posting comments that are obscene, defamatory or slanderous. Please avoid outside hyperlinks inside the comment and avoid typing all capitalized comments. Help us delete comments that do not follow these guidelines by flagging them(mouse over a comment and click the flag icon on the right side). Do use these forums to voice your opinions and create healthy discourse.