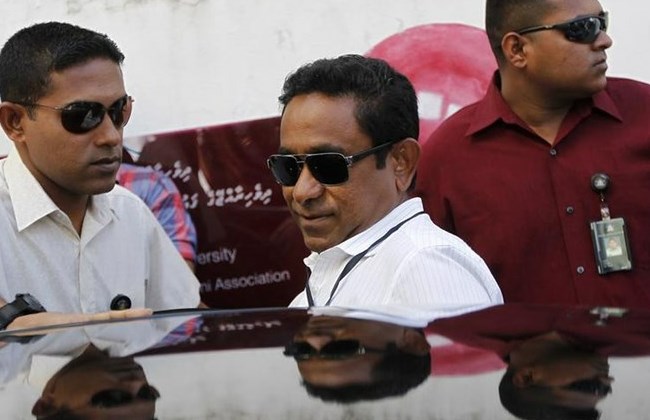 Maldives president unhurt in blast on his speed boat

An explosion hit a speed boat that Maldives President Abdulla Yameen was travelling in on Monday, but he was unhurt.

It was not immediately clear what caused the blast, which occurred off the capital island of Male.

“The president is unharmed,” his spokesman Ibrahim Muaz told reporters, giving no further details about the incident.

Reporters were at the presidential jetty to receive Yameen, who had landed a few minutes earlier at the nearby Hulhule airport after a a visit to Saudi Arabia.

Witnesses said they saw an ambulance rush to the jetty and police immediately cordoned off the area. (Daily Star)

TAGS :  Maldives President Abdulla Yameen ,  Maldives President ,  Abdulla Yameen ,  Boat ,
Disclaimer: All the comments will be moderated by the AD editorial. Abstain from posting comments that are obscene, defamatory or slanderous. Please avoid outside hyperlinks inside the comment and avoid typing all capitalized comments. Help us delete comments that do not follow these guidelines by flagging them(mouse over a comment and click the flag icon on the right side). Do use these forums to voice your opinions and create healthy discourse.