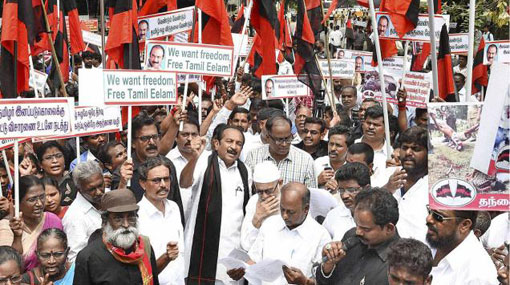 Vaiko detained during protest against draft US resolution

MDMK general secretary Vaiko and representatives from 32 organisations were detained on Monday morning after they threatened to lay siege to the U.S. Consulate in Chennai following a rally condemning the draft U.S. resolution for a domestic investigation into the alleged war crimes in Sri Lanka.

A large number of supporters belonging to the 32 organisations under the “May Pathinezhu Iyakkam” banner convened at the Rajarathinam Stadium in Egmore in protest against the draft resolution.

The protesters demanded an international investigation into the alleged genocide of Tamils, referendum for Tamil Eelam and lifting of the ban on the LTTE by all the countries.

“We will mobilise the youth, students in Tamil Nadu and wherever Tamils are living. The Union government has continuously betrayed the Tamils. First, the UPA government and now, the Modi government,” Mr.Vaiko said at the rally.

“What kind of an investigation is this? How can a person accused of a crime be allowed to investigate it,” Mr. Vaiko asked.

The protestors courted arrest when they tried to march to the U.S. Consulate. A large posse of police personnel had erected barricades around the venue and detained the protestors.

TAGS :  US ,  UNHRC ,  LTTE ,  Vaiko ,  Chennai ,  Mahinda Rajapaksa ,
Disclaimer: All the comments will be moderated by the AD editorial. Abstain from posting comments that are obscene, defamatory or slanderous. Please avoid outside hyperlinks inside the comment and avoid typing all capitalized comments. Help us delete comments that do not follow these guidelines by flagging them(mouse over a comment and click the flag icon on the right side). Do use these forums to voice your opinions and create healthy discourse.