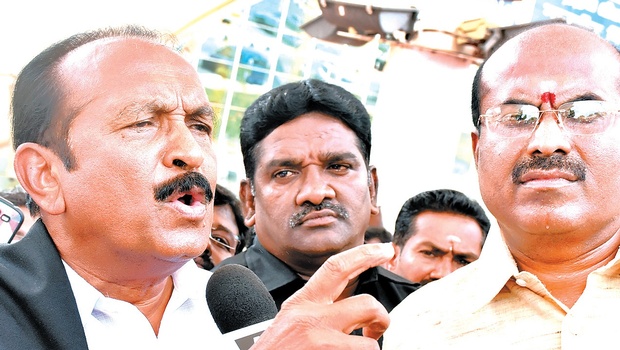 With the United Nations’ report on Sri Lankan war crimes likely to come up for discussion at the UN Human Rights Council in Geneva on Wednesday, India’s MDMK general secretary Vaiko has said that it will be a black day for Tamils all over the world, The New Indian Express reports.

Talking to reporters at Coimbatore International Airport he has said that justice will be hanged and openly buried, right on the premises of the Human Rights Council. “Innocent Tamils were murdered and hospitals were bombed, killing patients, which is genocide. Don’t Tamils belong to human race and why should we be punished like this?” he asked.

“UN High Commissioner for Human Rights Zeid Ra’ad Al Hussein says more sufficient evidence is needed to establish genocide, which means the investigation team is not allowed to enter Sri Lanka. I blame the countries, particularly the US and UK for conniving with Lanka at the behest of India,” he charged.

He further said that the draft resolution released a couple of days ago wanted the demilitarisation of the North and East of Sri Lanka but the final draft made no mention of it.

“The UN High Commissioner had recommended a hybrid court but the draft resolution says no involvement of foreign judges, but only the Sri Lankan government will decide on the human rights violations during the war,” Vaiko said.

“The killer has been made the judge and India has played a major role to betray the Tamils,” he rued.

Vaiko accused the previous UPA regime of being responsible for the murder of hundreds of thousands of Tamils and also the DMK-PMK alliance in Tamil Nadu for abetting the crime.

TAGS :  Sri Lanka ,  Tamil ,  Sri Lankan Tamil ,  War Crimes ,
Disclaimer: All the comments will be moderated by the AD editorial. Abstain from posting comments that are obscene, defamatory or slanderous. Please avoid outside hyperlinks inside the comment and avoid typing all capitalized comments. Help us delete comments that do not follow these guidelines by flagging them(mouse over a comment and click the flag icon on the right side). Do use these forums to voice your opinions and create healthy discourse.