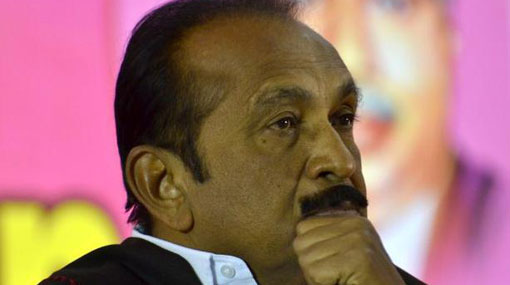 “Though the U.S., Russia, Pakistan and India have divergent views on international matters, they have together supported Sri Lanka. The murder of justice will be widely exposed. The MDMK will mobilise 10 lakh youth to create awareness of the injustice perpetrated on Sri Lankan Tamils,” Vaiko told reporters.

Be it during the present NDA government at the Centre or the previous UPA regime, India’s support to Sri Lanka remained the same, he said. The DMK and the PMK which are now issuing statements did not raise their voice when they were part of the UPA government. Had the DMK taken a strong stand, the MDMK would have supported it, and the war crimes could have been prevented, Vaiko said.

The People’s Welfare Front consisting of the MDMK, the CPI, the CPI (M) and the VCK will take significant decisions at the Front’s Tiruvarur meeting scheduled for October 5, Vaiko added. (The Hindu)

TAGS :  Sri Lanka ,  Tamil ,  Sri Lankan Tamil ,  War Crimes ,
Disclaimer: All the comments will be moderated by the AD editorial. Abstain from posting comments that are obscene, defamatory or slanderous. Please avoid outside hyperlinks inside the comment and avoid typing all capitalized comments. Help us delete comments that do not follow these guidelines by flagging them(mouse over a comment and click the flag icon on the right side). Do use these forums to voice your opinions and create healthy discourse.