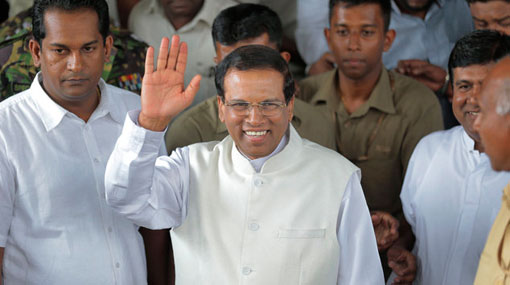 President arrives after concluding US visit

President Maithripala Sirisena arrived in the country a short while ago after concluding his visit the United States to attend the UN General Assembly in New York.

A special ceremony was organised at the Bandaranaike International Airport (BIA) in Katunayake to welcome the President upon arrival.

A large number of politicians including Ministers lined up to greet the President while a number of people had also gathered outside the airport premises.

During his time in New York, the President met the US President Barack Obama and had a meeting with India Prime Minister Narendra Modhi. He also had bilateral discussions with state leaders of Malta, Pakistan, New Zealand and Australia.

President Maithripala Sirisena addressed the 70th General Debate of the UNGA, stressing that the edifice of sustainable development should be built upon the foundation of self-discipline and equity.

He also addressed the Leaders’ Summit on Peacekeeping and commended the task carried out by the UN peacekeepers.  He said the world today is a safer place because of the brace UN peacekeepers.

President Sirisena delivering the Commitment Statement at the Global Leaders’ Meeting on Gender Equality and Women’s Empowerment, said the Sri Lanka government will take the responsibility of ensuring the promotion and protection of the rights of women in Sri Lanka very seriously and remains firm in the commitment to strive continuously with diligence to achieve gender equality and women’s empowerment.

TAGS :  Maithripala Sirisena ,  US ,  UNGA ,  New York ,  Barack Obama ,
Disclaimer: All the comments will be moderated by the AD editorial. Abstain from posting comments that are obscene, defamatory or slanderous. Please avoid outside hyperlinks inside the comment and avoid typing all capitalized comments. Help us delete comments that do not follow these guidelines by flagging them(mouse over a comment and click the flag icon on the right side). Do use these forums to voice your opinions and create healthy discourse.