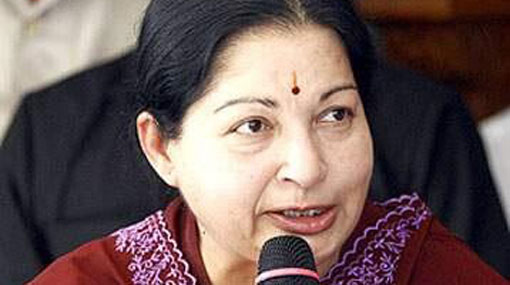 Accusing Sri Lanka of intimidating Indian fishermen through repeated arrests to prevent them from venturing into their traditional fishing waters in the Palk Bay, Chief Minister J Jayalalithaa drew the attention of Indian Prime Minister Narendra Modi to yet another incident of arrest of fishermen by the island navy on October 1.

The Chief Minister, in her letter to the Prime Minister, requested him to initiate immediate action through diplomatic channels to secure the release of seven fishermen from Nagapattinam district arrested on October 1, as well as the release of the 28 fishermen and 31 fishing boats in Lankan custody, the New Indian Express news agency reported.

Jayalalithaa said the latest belligerent act of the Lankan Navy perpetrated on innocent and unarmed Indian fishermen had added to the immense frustration that had built up among the fishermen community of Tamil Nadu.
She said the unconstitutional Indo-Sri Lankan Agreements of 1974 and 1976 should be nullified and the traditional rights of Tamil Nadu fishermen restored at the earliest.

She reiterated that the Centre should not treat the International Maritime Boundary Line (IMBL) with Lanka as a settled question, as the constitutionality of the 1974 and 1976 agreements had been challenged by her on extremely valid and legal grounds in the Supreme Court. (New Indian Express)