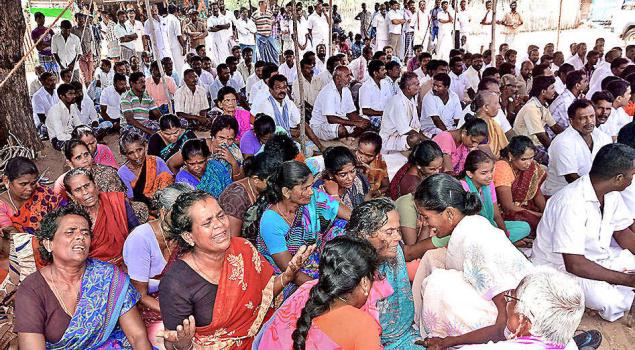 The fishermen of Rameswaram island in India and the family members of a missing fisherman have observed fast here, urging the authorities to trace him who went missing after the boat he was in sank on the high seas, and protesting against Sri Lankan navy for repeatedly arresting the fishermen and confiscating their trawlers, The Hindu newspaper reported.

Even as members of 11 mechanised boat fishermen associations and the family members of Vilvaraj, who went missing while fishing, began the fast, they were informed that the Ministry of External Affairs had accorded permission for salvage operation to trace Vilvaraj.

Vilvaraj was fishing on the high seas off Katchatheevu along with three other fishermen on the night of September 26 when the boat sank. While the Lankan navy rescued three fishermen, Vilvaraj was feared caught inside the boat and drowned.

Even if the body could not be traced in the salvage operation, the government should provide compensation to the family of Vilvaraj, who was survived by his wife and two daughters, P. Sesu Raja, a fishermen leader, said.

Mr. Sesu Raja said that the Lankan navy prevented them from pursuing their livelihood in their traditional waters. He urged the Central and State governments to find a permanent solution to the problem, provide compensation to 18 fishermen who had lost their boats after they were confiscated by the Lankan authorities and damaged by bad weather, and secure the release of 35 fishermen, presently lodged in Lankan prisons, along with 33 boats.

Meanwhile, sources in the fisheries department here said that 12 fishermen in two trawlers would launch the operation to salvage the sunken boat and trace Vilvaraj.

The salvage team would be escorted by Indian Coast Guard up to the International Maritime Border Line and from there by the Sri Lankan navy. The team had been asked to be ready on Thursday morning and it would leave the jetty after getting clearance from Lankan navy, sources added. (The Hindu)