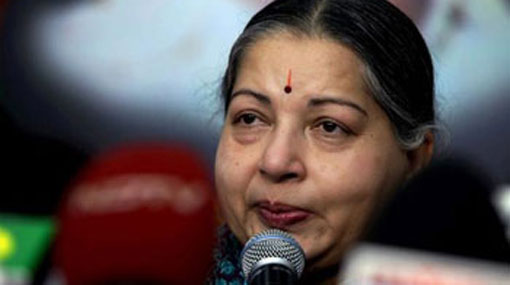 India must act on arrests of fishermen, says Jayalalithaa

In a letter to Prime Minister Narendra Modi, the AIADMK leader cited the arrest of 24 fishermen by Sri Lankan authorities on Monday.

“India cannot continue to be seen as a mute spectator as the rights of Indian fishermen are repeatedly infringed upon,” she said.

She stressed that the issue needed the intervention at the highest political level, not just the diplomatic level.

“In the present circumstances, I have no doubt that you would agree that the fishermen issue needs to be placed at the top of the agenda in any interaction with Sri Lanka,” Ms Jayalalithaa told Mr Modi.

According to her, the harassment and frequent arrests of Tamil Nadu fishermen was an abrogation of their fishing rights in their traditional fishing areas.

“As on date, 78 fishermen from Tamil Nadu and 38 boats of fishermen belonging to Tamil Nadu are in Sri Lankan custody,” she said.

The Chief Minister said contrary to her hopes that there would be a positive change after the advent of a new regime in Sri Lanka, incidents of arrests of Tamil Nadu fishermen showed no signs of abating.

India and Sri Lanka are divided by a narrow strip of sea. Fishermen from Tamil Nadu are accused of intruding into Sri Lankan waters. (NDTV)

TAGS :  jayaa ,  Sri Lanka ,  Fishermen ,
Disclaimer: All the comments will be moderated by the AD editorial. Abstain from posting comments that are obscene, defamatory or slanderous. Please avoid outside hyperlinks inside the comment and avoid typing all capitalized comments. Help us delete comments that do not follow these guidelines by flagging them(mouse over a comment and click the flag icon on the right side). Do use these forums to voice your opinions and create healthy discourse.