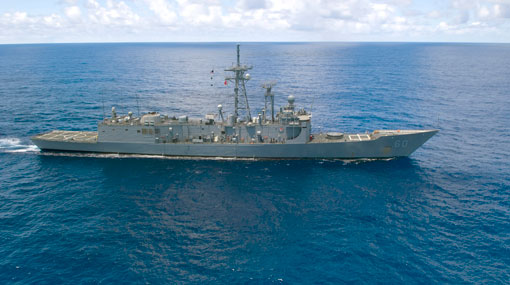 Sri Lanka would consider allowing Chinese naval ships to visit again but no request has been forthcoming yet, the country’s defence Secretary said on Sunday.

Sri Lanka’s previous government had caused concern in India with its close ties to Beijing, including allowing Chinese submarines to dock.

New Sri Lankan President Maithripala Sirisena has unnerved China though with his re-examination of relations, including a $1.5-billion Chinese-invested “port city” project in the capital Colombo.

But Sri Lankan Defence Secretary  Karunasena Hettiarachchi, who only took up his post last month, told Reuters in Beijing that he would give serious thought to new requests from China for naval ships to call, even if there are no plans currently.

“It has not come to my table yet. If it comes I’ll give it due consideration. If it comes in the right track we’ll consider it seriously,” he said on the sidelines of a military forum.

“If it is really interesting and worthwhile, sometimes we do combined operations and exercises with military vessels from around the world, no discrimination.”

China has built a seaport and airport in Sri Lanka’s south, raising fears it is seeking influence in a country with which India has traditionally had deep ties.

China’s defence minister told the head of the Sri Lankan navy in June he wanted to ensure a “continuous and stable” development of military ties.

Hettiarachchi said his government was just trying to make sure it was being transparent in its relations with China, and that military ties should remain strong.

“There was a complaint about the previous regime about transparency but I think we are more transparent and our relations are going to be stronger in times to come.” (reuters)

TAGS :  China navy ships ,  China ,  navy ,  ships ,
Disclaimer: All the comments will be moderated by the AD editorial. Abstain from posting comments that are obscene, defamatory or slanderous. Please avoid outside hyperlinks inside the comment and avoid typing all capitalized comments. Help us delete comments that do not follow these guidelines by flagging them(mouse over a comment and click the flag icon on the right side). Do use these forums to voice your opinions and create healthy discourse.