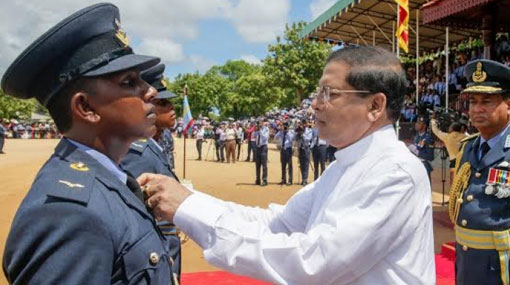 “The Sri Lanka Air Force, demonstrating its specific skills, weakened the enemy by attacking them directly when the Army and Navy were facing difficult situations in the operation to eradicate LTTE terrorism in the last few decades”, said President Maithripala Sirisena.

The President, who was welcomed by the Air Force Officers according to military traditions, was escorted by them to the main stage.

The President also expressed his satisfaction over the high standards and the quality of the services of Air force. The President recalled with honour the war heroes who sacrificed their lives for the Motherland and those who were disabled. He also paid his tribute to the relatives of the War Heroes for their great service to the country.

President Sirisena further said that the Sri Lanka Air Force did an excellent service to protect the sea boundaries of the country and has earned the respect for fulfilling their duties trust-worthily with a great commitment during the past few decades. The President said that he believes in the future too, the officers of the Sri Lanka Air Force would fulfill their duties regarding the national security in a similar manner with the guidance of the new Commander of the Air Force. He also pledged to provide required new technology and facilities to fulfill their duties in a perfectly satisfactory manner.