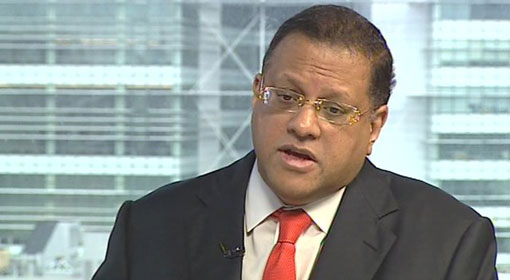 The Central Bank of Sri Lanka left its standing lending facility rate at 7.5 percent and standing deposit facility rate at 6 percent, Mahendran said in an interview with Bloomberg Television on Tuesday. All four economists in a Bloomberg survey had predicted no change.

“Inflation is expected to remain comfortably in low single digit levels by end 2015 despite the impact of the depreciation of the Sri Lankan rupee against major currencies,” the central bank said in its statement.
Consumer prices dropped a record 0.3 percent in September amid a global commodity slump, even as the rupee weakened 6.8 percent this year, poised for its steepest decline since 2012.

President Maithripala Sirisena’s administration is due to present its first full-year budget next month. The economy grew 6.7 percent in April-June under a new calculation method. This pace will probably continue over the next couple of years, reducing the need for Mahendran to support growth, according to Capital Economics.

“With inflation likely to rebound soon, we don’t think it will be long before the central bank starts to hike rates,” Singapore-based economist Daniel Martin wrote in a report after the decision. Tuesday’s move “reflects concerns about the external position deteriorating and unsustainable credit growth mounting,” he said.

Capital Economics predicts Sri Lanka will raise its lending rate to 8 percent in 2016.

TAGS :  Central Bank of Sri Lanka ,  CBSL ,  Governor Arjuna Mahendran ,  Governor ,  Arjuna Mahendran ,
Disclaimer: All the comments will be moderated by the AD editorial. Abstain from posting comments that are obscene, defamatory or slanderous. Please avoid outside hyperlinks inside the comment and avoid typing all capitalized comments. Help us delete comments that do not follow these guidelines by flagging them(mouse over a comment and click the flag icon on the right side). Do use these forums to voice your opinions and create healthy discourse.