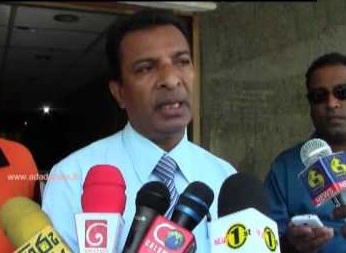 Media Secretary to the former President, Rohan Weliwita, has been summoned to the Homagama Police station to record a statement this morning (20), a police source says.

The Media Secretary has been informed to appear at the police station to question him regarding the misplacement of several video footages at the President Media Unit.

The police on Sunday had also visited Weliwita’s residence at Homagama to record the statement, however he was not at home at the time, it was reported.

TAGS :  Media Secretary to the former President ,   Rohan Weliwita ,  Media Secretary ,
Disclaimer: All the comments will be moderated by the AD editorial. Abstain from posting comments that are obscene, defamatory or slanderous. Please avoid outside hyperlinks inside the comment and avoid typing all capitalized comments. Help us delete comments that do not follow these guidelines by flagging them(mouse over a comment and click the flag icon on the right side). Do use these forums to voice your opinions and create healthy discourse.