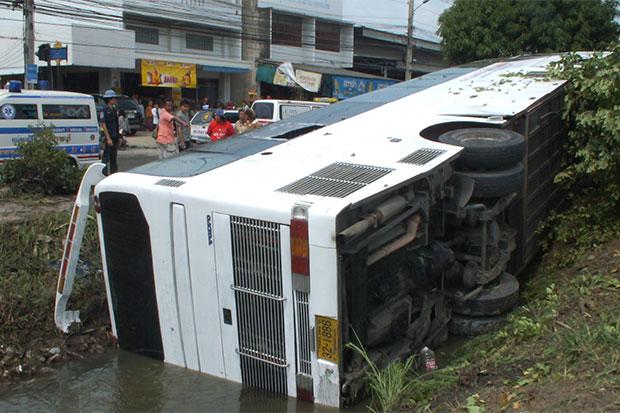 Twenty-two people, mainly Sri Lankan tourists, were hurt when their tour bus overturned into a ditch in Ratchaburi’s Photharam district on Thursday afternoon.

The coach was returning from the Damnoen Saduak floating market when the driver lost control while overtaking another vehicle, careering into the ditch along Phetkasem Road in tambon Nong Pho, said Pol Lt Pradit Khongprem, a duty officer at Photharam police station, who was alerted around 2pm on Thursday, according to the Bangkok Post news agency.

Police and rescue workers found many tourists trapped in the overturned coach but all were rescued.

The injured passengers, mostly Sri Lanka tourists, and injured Thai driver were rushed to Photharam Hospital, said police. There were 34 people on board.

Vorachot Kraisri, the driver of another tour bus, told police there were four coaches taking over 100 Sri Lankans to the floating market in Damnoen Saduak district.

The buses were heading to Nakhon Pathom when the one driven by Boonma Nachaikham crashed. Ratchaburi governor Surapol Sawaengsak rushed to the scene and ordered officials to take good care of the injured tourists. He arranged vans to take the unhurt tourists to their destination.

TAGS :  Sri Lankan ,  tourists ,  hurt ,  ditch ,  Thailand ,
Disclaimer: All the comments will be moderated by the AD editorial. Abstain from posting comments that are obscene, defamatory or slanderous. Please avoid outside hyperlinks inside the comment and avoid typing all capitalized comments. Help us delete comments that do not follow these guidelines by flagging them(mouse over a comment and click the flag icon on the right side). Do use these forums to voice your opinions and create healthy discourse.