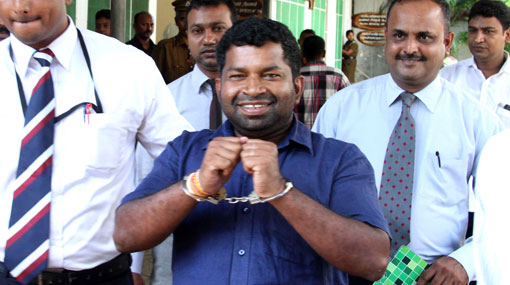 The Colombo Chief Magistrate today permitted the CID to detain and question former Eastern Province Chief Minister Sivanesathurai Chandrakanthan alias Pillayan, who was arrested in connection with the murder of ex-MP Joseph Pararajasingham, till December 10 under detention orders.

Pillyan was arrested on October 11 when he arrived at the CID to give a statement in connection with the assassination of late Tamil politician, who was shot dead on Christmas Eve in 2005.

The Colombo Chief Magistrate had permitted the Criminal Investigation Department (CID) to detain Pillayan for questioning till today (November 04) when he was produced before the court.

The magistrate extended the detention order till December 11 following a request by the CID when the case was taken up today.

Gunmen opened fire on TNA MP Pararajasingham just after he received communion at St Mary’s church in Batticaloa, killing him and injuring eight others, including his wife.

The assassination, which occurred during the official ceasefire between the government and the LTTE, was condemned by Tamils around the world.

TAGS :  Pillayan ,  Joseph Pararajasingham ,  CID ,  TNA ,
Disclaimer: All the comments will be moderated by the AD editorial. Abstain from posting comments that are obscene, defamatory or slanderous. Please avoid outside hyperlinks inside the comment and avoid typing all capitalized comments. Help us delete comments that do not follow these guidelines by flagging them(mouse over a comment and click the flag icon on the right side). Do use these forums to voice your opinions and create healthy discourse.