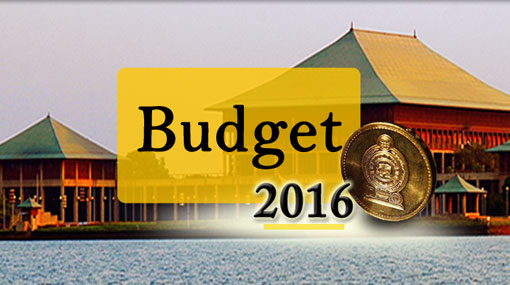 6.30pm - Value Added Tax (VAT) threshold revised to Rs 12 million per year. Wholesale and retail trade (other than by a manufacturer or importer) excluded from VAT.

6.25pm - Present withholding tax deductible by bank financial institutions on interest from deposits at the rate of 2.5% will be removed.

6.12pm - Taxes on English and Tamil films and advertisements removed.

5.51pm - New pension scheme for tho enter public sector from 2016 including Members of Parliament.

5.48pm - New domestic airports to be built in Digana, Badulla and Puttalam. Mattala Airport to be converted into a transfer terminal for air cargo.

5.45pm - A Rs 250 savings account to be introduced to all Grade 1 students while all teachers to get 2 years training.

5.43pm - Import tax on printed book, journals and magazines to be complexly removed.

5.39pm - Rs 4,000 million to be allocated for the improving of sanitation facilities and water supplies for all schools in the island by end of 2016.

5.25pm - New university named “Mahapola University” to be established in Malabe with an investment of Rs 3,000 million.

5.20pm - Minister proposes all employees to instruct their employers to open a bank account for the purpose of remitting their salaries. “It will be knows as a salaries account.” Every employee will have a bank account opened by the employer for and on his behalf.

5.14pm - The Divineguma Bank to be merged with the National Savings Bank.

5.08pm - Special emphasis will be placed on developing Bentota, Deduwa, Mirissa, Colombo Fort locality as tourist zones with participation of private sector. Galle to be developed as Heritage City.

5.01pm - Special zone to be reserved in D.R. Wijewardena Mawatha for the establishing of the Colombo International Financial Center.

4.59pm - Plans to convert Sri Lanka into a shopping paradise. Duties on electronic items, shoes, garments and other accessories to be reduced to make the country a shopping hub like Singapore.

4.52pm - 100,000 housing units to be constructed for low income families within 5 yeas. Import taxes imposed on construction materials to be reduced.

4.50pm - A new state-of-the-art convention hall to be built at a cost of Rs 3,000 million in the New Town Hall area in Colombo.

4.47pm - Finance Minister proposes to abolish Securities Investment Account (SIA) trough which the foreign investors have been requested to channel their investments to the country. “Investors should be allowed to bring in their money to Sri Lanka through any bank account.”

4.40pm - Super gain tax to be removed. “NO such Super Gain Tax in the future,” says minister.

4.34pm - Finance Minister proposes to remove the tax imposed on leasing of land to foreigners also to remove all restrictions on ownership of identified investments imposed through the land restriction on alienation act.

4.30pm - Investment Promotion: Sri Lanka to be made one of the quickest places to get investments in the world (within 50 days).

4.24pm - National Digital Identification system will be introduced from January 01, 2016. Rs 10 billion to be allocated for this project. All government buildings to be digitized by 2018.

4.20pm - Auction of the gem and Jewellery institution will be held. “A gem auction will be held in Sri Lanka every April and in October and our intention is to get a better rate for the crude gems that are there.” April 2016 will be the first auction in this country, Ravi says.

4.10pm - Government to allocate Rs 4 billion for wildlife conservation and to solve the human-elephant conflict over a period of 3 years.

4.04pm - Rs 1.5 billion to be allocated for each Grama Niladhari Division for rural economy development. New economic zone to be created in Vavuniya.

4.05pm - Government to promote export of chicken: “In order to assist to get into the international market the government will make anything and everything possible to make it competitive so that we’ll be able to go into a new market,” said Ravi K.

4.00pm - Rs 750 million to be allocated for the development of the fisheries harbours in Chilaw, Mirissa, Kalmunai, Valvettithurai

3.54pm - Life insurance scheme for Rs 1 million for fishermen will be introduced

3.50pm - The maximum retail price of a 400g packet of locally manufactured milk powder will be reduced from Rs 325 to Rs 295 – Finance Minister

3.38pm - Rice production in the country has increased - Ravi.

3.20pm - The government will establish a regulatory authority to streamline micro, small and medium scale enterprises.

2.40pm - Mattala Airport has become a kingdom for the peacocks - Ravi.

2.38pm - Criticizing the previous government over its economic and foreign policies, Karunanayake accused the Rajapaksa govt of obtaining loans at high interest rates.

2.31pm - Ravi thanks the military for ridding the country of terrorism and says that gratitude should go beyond mere plaques.

2.28pm - The 2005-2015 Mahinda Rajapaksa era will go down in history as a time period where the people’s hopes and aspirations were dashed, Ravi Karunanayake said delivering the budget speech.

The new government’s first full-year budget, for the fiscal year of 2016, is being presented to the Parliament of Sri Lanka by Finance Minister Ravi Karunanayake.

It is the first Budget of the unity government formed by the UNP and SLFP under President Maithripala Sirisena and Prime Minister Ranil Wickremesinghe and the 69th Budget overall.

TAGS :  Budget 2016 ,  Parliament ,   Ravi Karunanayake ,  govt ,  budget ,
Disclaimer: All the comments will be moderated by the AD editorial. Abstain from posting comments that are obscene, defamatory or slanderous. Please avoid outside hyperlinks inside the comment and avoid typing all capitalized comments. Help us delete comments that do not follow these guidelines by flagging them(mouse over a comment and click the flag icon on the right side). Do use these forums to voice your opinions and create healthy discourse.