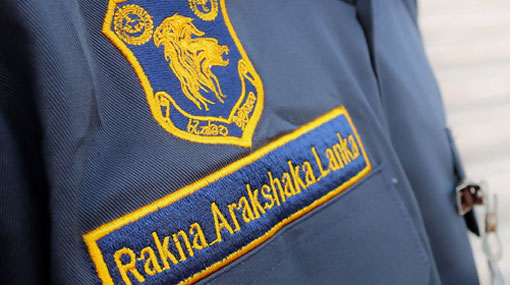 Two former Commanders of the Sri Lanka Navy, a former Defence Ministry Additional Secretary and the Chairman of Avant-Garde Security Services have been named as respondents in the case filed over alleged financial fraud at Rakna Arakshaka Lanka Ltd, according to sources.

However, attorneys representing Mr Senadhipathi raised preliminary objections against the naming of their client as a respondent in the case.

An attorney for the Avant-Garde company said they have been informed to submit the objection in writing to the commission.

However, the Secretary of the commission of inquiry (CoI) Lesil de Silva said that investigations into allegations of financial fraud at Rakna Lanka are still ongoing and that no one has been named as respondents.

Meanwhile former Defence Secretary Gotabaya Rajapaksa was summoned by the commission this morning to record a statement in connection with the investigation.

Admiral (Retd) Jayanath Colombage, speaking to reporters, said that he has been notified to appear before the commission again on December 03.

TAGS :  Jayanath Colombage ,  SLN ,  Avant Garde ,  Rakna Arakshaka Lanka ,  Nissanka Senadhipathi ,  Jayantha Perera ,
Disclaimer: All the comments will be moderated by the AD editorial. Abstain from posting comments that are obscene, defamatory or slanderous. Please avoid outside hyperlinks inside the comment and avoid typing all capitalized comments. Help us delete comments that do not follow these guidelines by flagging them(mouse over a comment and click the flag icon on the right side). Do use these forums to voice your opinions and create healthy discourse.