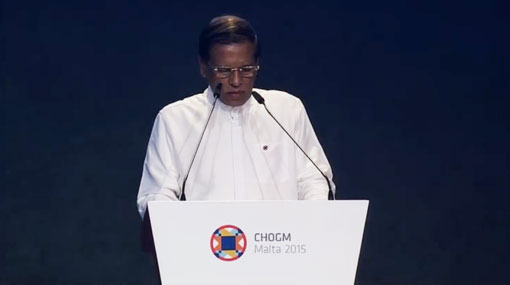 Common values are important and not the power of wealth  President

President Maithripala Sirisena said he is fully satisfied with the accomplishment of goals set at the last CHOGM in Colombo during the period of last two years when Sri Lanka was the Chair in Office of the Commonwealth.

Addressing the Commonwealth Heads of Government Meeting in Malta today (November 27), he said that the progress made in areas such as poverty eradication, promotion of trade, sustainable development, involvement of youth in development activities, growth, equality and dignity of the citizens.

He said that he was extremely happy that the Queen attended the Summit and praised her great leadership, the President’s Media Division reported.

The President pointed out the issues such as sustainability development greatly emphasized during the CHOGM in Colombo in 2013, have been raised subsequently in the United Nations, thus combining the commonwealth endeavour in this regard.

The President said that what is important is common values and not the power of wealth. He emphasized the imperative need to achieve growth, equality and dignity for the people. He emphasized the need for protection of environment.

Referring to the Kotte Statement issued during the CHOGM 2013 in Colombo, he categorically stated the need to enhance trade initiatives to expand private sector engagement in trade and economic activity.

President Sirisena praised the work of the outgoing Secretary General Kamlesh Sharma and thanked him for the excellent support and cooperation extended to him as Chair in Office. He offered best wishes to ne Chair in Office, Malta Premier Joseph Muscat.

President Sirisena was the first to arrive at the Mediterranean Conference Hall as he was entrusted with the responsibility of Chairing the Meeting as CHOGM Chair in Office. Commonwealth Secretary General Dr Kamlesh Sharma received the President and Madam Jayanthi Sirisena at the entrance. Together, they received the next Chair in Office, Prime Minister of Malta Joseph Muscat and Mrs Muskat.

TAGS :  Maithripala Sirisena ,  CHOGM ,  Malta ,  Commonwealth ,  Kamalesh Sharma ,
Disclaimer: All the comments will be moderated by the AD editorial. Abstain from posting comments that are obscene, defamatory or slanderous. Please avoid outside hyperlinks inside the comment and avoid typing all capitalized comments. Help us delete comments that do not follow these guidelines by flagging them(mouse over a comment and click the flag icon on the right side). Do use these forums to voice your opinions and create healthy discourse.