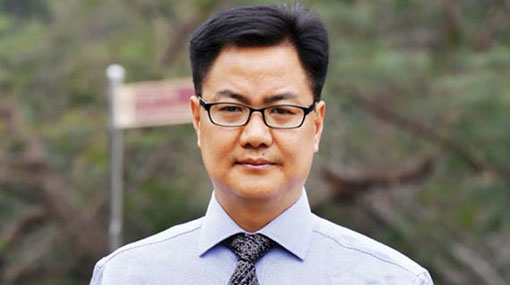 India is committed to build 50,000 houses for internally displaced people in Sri Lanka, the Lok Sabha was informed on Tuesday.

India’s Minister of State for Home Kiren Rijiju said the project envisages construction of new houses and repair of damaged houses and it is being implemented through two models, agency driven and owner-beneficiary driven.

“The beneficiaries of the housing project are identified through a consultative process,” he said in reply to a written question.

Rijiju said as per the information received from the state governments of Tamil Nadu and Odisha, a total of 1,01,368 Sri Lankan Tamil refugees are presently staying in the country.

“There has been no organised repatriation of Sri Lankan Tamil refugees since 1995,” he said.

The Minister said the Sri Lankan government has released nearly 2,000 acres of land to internally displaced persons in the Northern and Eastern provinces.

In January 2015, the External Affairs Minister, during her meeting with visiting Sri Lankan Foreign Minister, has urged the Sri Lankan government to create conducive environment for Sri Lankan refugees to return to Sri Lanka.

The Sri Lankan government has been extending facilities, including education, civil documentation and medical services to any returning Sri Lankan citizen after staying as refugee, including in India, he said.

TAGS :  Kiren Rijiju ,  Lok Sabha ,  Sri Lankan refugees ,  Tamil Nadu ,
Disclaimer: All the comments will be moderated by the AD editorial. Abstain from posting comments that are obscene, defamatory or slanderous. Please avoid outside hyperlinks inside the comment and avoid typing all capitalized comments. Help us delete comments that do not follow these guidelines by flagging them(mouse over a comment and click the flag icon on the right side). Do use these forums to voice your opinions and create healthy discourse.