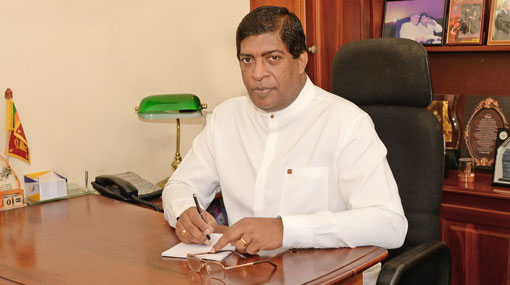 Finance Minister Ravi Karunanayake says that the Sri Lankan government is prepared give the go-ahead for the Colombo Port City project to resume even tomorrow, if the Chinese company agrees to begin the US$1.4 billion project on a 99-year lease.

The project, planned on 233 hectares of reclaimed land in Colombo, was launched by former President Mahinda Rajapaksa and the Chinese President Xi Jinping on 17 September 2014.

Construction was carried out by the China Harbour Engineering Company Ltd. (CHEC), a subsidiary of state-controlled China Communications Construction Company Ltd (CCCC), which is financing the project.

After the new government led by President Maithripala Sirisena and Prime Minister Ranil Wickremesinghe came into power in early January this year, the project was halted owing to various concerns including the absence of a proper environmental impact assessment (EIA).

An additional EIA report was later compiled under the direction of the government and is now under public consultation, which is expected to end around the middle of January next year.

Under the original agreement, the Hong Kong-listed CCCC would keep 108 hectares, including 20 hectares on a freehold basis and the rest on a 99-year lease while Sri Lanka would own the rights to the other 125 hectares.

The government has asked the Chinese company to agree to a change in provision of freehold land into leasehold land to enable the project to resume, Karunanayake told Ada Derana.

The government is prepared to allow construction of the port city to commence even tomorrow if they agree to that condition, the finance minister said.

The EIA reports would not be a big issue then, he said.

A spokesman for the China Harbour Engineering Company, speaking to Ada Derana, confirmed that they have been informed by the Government of Sri Lanka to agree to a 99-year lease in order to resume work on the project, but said, that the company has still not reached a final decision on the matter.

However, he said, that the company hopes go with a solution that does justice to both parties involved.

TAGS :  Colombo Port City Project ,  CCCC ,  China ,  CHEC ,  Ravi Karunanayake ,  Ranil Wickremesinghe ,
Disclaimer: All the comments will be moderated by the AD editorial. Abstain from posting comments that are obscene, defamatory or slanderous. Please avoid outside hyperlinks inside the comment and avoid typing all capitalized comments. Help us delete comments that do not follow these guidelines by flagging them(mouse over a comment and click the flag icon on the right side). Do use these forums to voice your opinions and create healthy discourse.