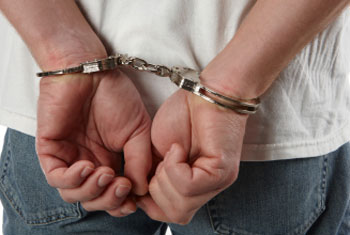 Indian Police have arrested an accused, who acted as a kingpin of a drug peddling gang, which smuggled narcotics to Sri Lanka after a high drama during a vehicle check, The Hindu newspaper reported.

Indian police team, headed by Inspector of Police Rajkumar Samuel, was engaged in a vehicle check near the check post when R. Selvakumar (33), a drug trafficker, failed to stop his car and tried to escape when the police team arrested him after a hard chase, police said.

On being chased, the accused alighted from the vehicle and took to his heels but the police overpowered him.

He suffered injuries in both his knees when he tried to escape by scaling over a compound wall, police said. Police seized from him five kilograms of ganja and seven mobile phones.

The accused, who hailed from Rameswaram, came under the police radar in 2008, when he came in contact with an agent of the Liberation Tigers of Tamil Eelam (LTTE) and started smuggling batteries, motors and other goods for the militant organisation.

He was arrested twice in 2008 under the provisions of Unlawful Activities (Prevention) Act and NDPS Act for the first time in December 2009 by the CID wing of Narcotics Intelligence Bureau (NIB) when he attempted to smuggle one kilogram of heroin, Indian police has said.

Soon after he came out on bail, the ‘Q’ branch police arrested him in January 2010 and seized from his possession, 500 grams of heroin, Rs. 8 lakh cash, a loaded pistol and a Global Positioning System (GPS) device, police said.

Later, the Dhanushkodi police arrested him in March, 2013 when he attempted to smuggle 150 kilograms of ganja followed by the Pamban police in September, 2014 for trying to smuggle 102 kilograms of ganja, police said. All the ten cases were pending for trial or under investigation, police added.

TAGS :  Indian Police ,   arrested ,   drug ,   smuggled ,
Disclaimer: All the comments will be moderated by the AD editorial. Abstain from posting comments that are obscene, defamatory or slanderous. Please avoid outside hyperlinks inside the comment and avoid typing all capitalized comments. Help us delete comments that do not follow these guidelines by flagging them(mouse over a comment and click the flag icon on the right side). Do use these forums to voice your opinions and create healthy discourse.