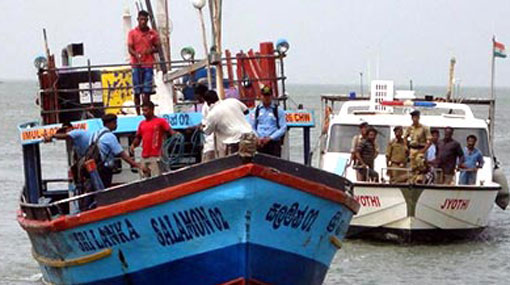 Twelve Tamil Nadu fishermen were today arrested by the Sri Lankan Navy when they were fishing near Katchatheevu. Indian Assistant Director of Fisheries Gopinath said while eight fishermen were from Rameswaram, the rest were from Jegadappatinam in Pudukottai district, The Hindu newspaper reported.

He said the fishermen and their three boats have been taken to Talaimannar where they would be produced before a magistrate.

Fishermen in 550 boats had ventured into the sea from this island, officials said, adding, other fishermen have returned to the shore.

On December 31, 29 fishermen from Nagapattinam district in Tamil Nadu were detained by the Lankan navy when they were fishing off Trincomallee coast in Sri Lanka.

Indian Chief Minister Jayalalithaa has written to Prime Minister Narendra Modi voicing concern over recurring instances of such arrests besides seeking his intervention for release of over 80 Indian fishermen languishing in Sri Lankan prisons.