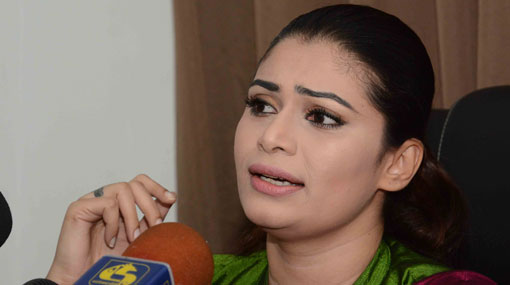 The Attorney General has instructed the Police to arrest Colombo District MP Hirunika Premachandra in connection with the abduction incident in Dematagoda.

Police had sought the AG’s Department advice on the arrest of Premachandra over the alleged abduction while it has been reported that sufficient evidence has been found regarding her involvement in the incident.

On December 21, a 34-year-old man was abducted in the Baseline Road area in Dematagoda and assaulted by a group of individuals who had arrived in a Land Rover Defender which is reportedly owned by MP Hirunika Premachandra.

It was later revealed that a clandestine love affair between the abduction victim and the wife of one of the suspects had led to the incident.

Police then carried out investigations regarding Premachandra’s connection to the recent abduction incident according to advice received from the Attorney General.

As per the AG’s advice, statements were recorded from the woman’s husband, who has been arrested and remanded along with 7 others, and her 11-year-old daughter.

The two statements recorded by the Colombo Crimes Division (CCD) were handed over to the Attorney General on January 01.

Following the abduction incident, Premachandra had held a press conference and revealed certain details pertaining to the case.

The Attorney General had also instructed for unedited footage of the press conference to be obtained.

The MP had said that she had no connection to the incident and that it was she who had instructed the suspects to surrender to police.

The 8 suspects arrested and remanded over the incident have been released on bail being identified by witnesses through an identification parade.

TAGS :  Hirunika Premachandra ,  AG ,  Ruwan Gunasekara ,  CCD ,  police ,  Dematagoda ,  abduction ,
Disclaimer: All the comments will be moderated by the AD editorial. Abstain from posting comments that are obscene, defamatory or slanderous. Please avoid outside hyperlinks inside the comment and avoid typing all capitalized comments. Help us delete comments that do not follow these guidelines by flagging them(mouse over a comment and click the flag icon on the right side). Do use these forums to voice your opinions and create healthy discourse.