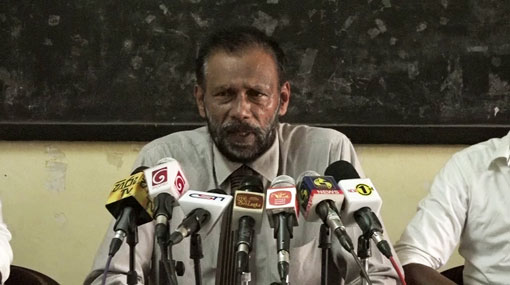 The Inspector General of Police (IGP) is attempting to cover up the Embilipitiya incident which resulted in the death of a youth and protect former ASP in charge of Embilipitiya, D.W.C. Dharmaratne, claims the attorney representing the family of the victim.

Attorney-at-law Vijitha G. Punchihewa, addressing a press conference in Colombo today, said that since the incident occurred, the Embilipitiya Police as well as several top officers of the Police Department are attempting to justify the incident and protect those responsible.

The Police Spokesman has repeatedly stated that the deceased, Sumith Prasanna, was hospitalized due to injuries sustained from jumping off a building.

“That statement worsened the already tense situation in Embilipitiya,” he charged.

He claimed that according to the information they have received, ASP Dharmaratna had previously served under then ASP and current IGP N.K. Illangakoon in his personal security. He stated that back then Dharmaratna was a Sub-Inspector (SI).

In the meantime police spokesman ASP Ruwan Gunasekara, who according to the attorney was also an obedient underling of the IGP, was selected along with ASP Dharmaratna to undergo a special course abroad under the recommendation of the police chief, he said.

That friend is the one who is handling the submission of evidence in the murder inquiry, Punchihewa stated.

The attorney said that he believes the IGP wants to cover this up and protect his underling.

Shashika Nishamani Munasinghe, the wife of the deceased, speaking at the press conference stated that she witnessed the ASP in question pushing Sumith Prasanna off the top floor of the building.