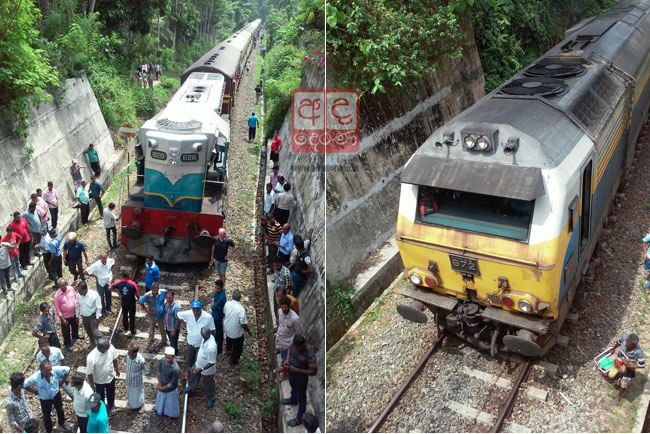 Two trains narrowly avoided a head-on collision in Ginthota on the Coastal Line as the drivers of the locomotives managed prevent a possible major train disaster this afternoon.

The Railway Control Room stated that the ‘Rajarata Rejina’ train traveling from Matara to Vavuniya and a train plying from Kandy to Matara were on the same track as they neared the Ginthota railway station.

However, the drivers of the engines managed to bring the two trains to a halt with a gap of only 10-15 feet between them and avert an accident.

The Railway Control Room stated that both trains were scheduled to divert to different tracks, however the Matara-bound train had proceeded forward ignoring the signals.

A spokesman for the railway control room stated that a special inquiry will be launched based on the statements obtained from the two train drivers.

TAGS :  trains ,  Coastal Line ,  Ginthota ,  Rajarata Rejina ,  Sri Lanka Railway ,  accident ,
Disclaimer: All the comments will be moderated by the AD editorial. Abstain from posting comments that are obscene, defamatory or slanderous. Please avoid outside hyperlinks inside the comment and avoid typing all capitalized comments. Help us delete comments that do not follow these guidelines by flagging them(mouse over a comment and click the flag icon on the right side). Do use these forums to voice your opinions and create healthy discourse.