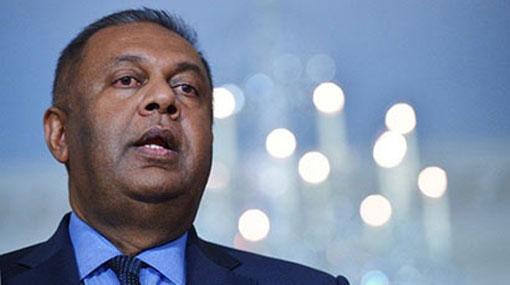 Pointing out that there were certain “misguided Sinhalese Buddhists of this country who wear their ethnicity and religion on their sleeve,” Mr. Samaraweera said that instead of being grateful to India for having given the majority of Sri Lanka “their great religion, Buddhism,” such persons feared India the most.

“Whenever a bridge over the Palk Straits to connect our two nations is proposed, they get into a paranoid frenzy that all of India is waiting drive over that bridge and make Sri Lanka their home.  When trade agreements are discussed, they see swarms of Indian doctors and barbers coming across to flood the Sri Lankan market,” he said.

Delivering a talk at the Sri Lanka-India Society, the Minister was referring to reactions among a section of parties and groups to reports in the media on the Indian government’s plan in building a sea bridge and tunnel connecting Rameswaram, Tamil Nadu, with Talaimannar, Northern Province of Sri Lanka.  His observations were also made in the context of steps being taken to get Economic and Technological Cooperation Agreement signed between the two countries.

‘See it as a great opportunity’

Even as India was forging ahead to become an economic superpower, Sri Lanka must see its neighbour “not as a threat but as a great opportunity to prosper and develop. Sri Lanka must realise that like Canada, Hong Kong or Vietnam, we are blessed with a historic opportunity by way of our location right next to one of the world’s largest and fastest growing economies -- an economy that is thirty times our size.”

On the benefits gained by Sri Lanka after signing Free Trade Agreement with India,  Mr. Samaraweera said Sri Lanka’s exports to India had increased by almost 10 times. The ratio of imports to exports between India and Sri Lanka declined from 10:1 to 6:1 within ten years of signing the pact. He mentioned that the Colombo Dockyard now had orders worth over $250 million to build ships for Indian companies.

And a call to India

At the same time, the Foreign Minister called upon India to be “vigilant to the needs, hopes and aspirations” of ordinary Sri Lankans.  Recurring issues such as the bottom trawling crisis in the North of Sri Lanka, which not only affected the livelihoods of thousands of poor families but also resulted in “dangerous environmental damage,” were resolved and did not give cause to anti-Indian feeling, the Hindu reports.

TAGS :  Mangala Samaraweera ,  India ,
Disclaimer: All the comments will be moderated by the AD editorial. Abstain from posting comments that are obscene, defamatory or slanderous. Please avoid outside hyperlinks inside the comment and avoid typing all capitalized comments. Help us delete comments that do not follow these guidelines by flagging them(mouse over a comment and click the flag icon on the right side). Do use these forums to voice your opinions and create healthy discourse.