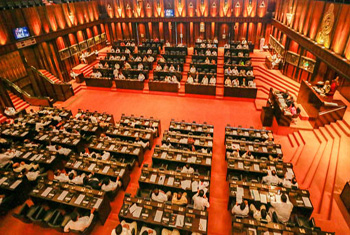 The Right to Information draft bill was presented to Parliament by Minister of Parliamentary Reforms and Mass Media Gayantha Karunathilaka a short while ago, Ada Derana reporter said.

The bill had received positive responses from all nine provinces to go ahead.

In terms of Article 153 (g) of the Constitution the Right to Information Bill was submitted to Provincial Councils for views which has been responded positively, Speaker Karu Jayasuriya recently informed the Parliament.

“Western, North Western, Central, Southern, Eastern, and Uva Provinces have agreed with the contents of this Bill. The three provinces Sabaragamuwa, North Central, and Northern Province have agreed subjected to amendments,” he said.

The Cabinet Approval for the draft bill was granted on 2nd December 2015 and it was sent for discussion at the provincial level. Right to Information Bill provides for the specific grounds on which access may be denied, the establishment of the right to Information Commission, setting out the procedures for obtaining information and for matters connected.

The introduction of the Right to Information Act was a key pledge in the 100-day work programme of the government.

TAGS :  News ,
Disclaimer: All the comments will be moderated by the AD editorial. Abstain from posting comments that are obscene, defamatory or slanderous. Please avoid outside hyperlinks inside the comment and avoid typing all capitalized comments. Help us delete comments that do not follow these guidelines by flagging them(mouse over a comment and click the flag icon on the right side). Do use these forums to voice your opinions and create healthy discourse.