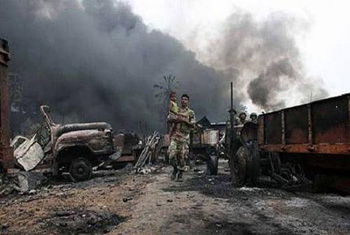 UN Watch welcomes the progress made by the Sri Lankan government since resolution 30/1 was adopted in October 2015, a Statement by UN Watch made during the 32nd Session of the UNHRC says.

The statement further stated, “However, we take this opportunity to stress the importance of the implementation of a framework to hold to account the parties responsible for the genocide of Sri Lankan Tamils. While progress in the country is welcome, little has been done to provide justice for the victims of the conflict.

The Sri Lankan conflict, which lasted nearly three decades, bore witness to war crimes and crimes against humanity. According to the Sri Lankan Government, almost 8,000 people were killed in the north, and 6,350 went missing after the Government’s defeat of the Tamil Tigers.

However, according to the United Nations panel of experts, established in 2010 by Secretary General Ban Ki-moon, the estimated civilian death toll was actually as much as 40,000. Tamil men and women suspected of having militant ties were subjected to government torture.

In his 2015 report, the High Commissioner called for Sri Lanka to take “immediate action to demonstrate its commitment to redressing past violations.” This was to include the investigation of the disappearance of political prisoners and an end to intimidation of civil society actors. Yet the government has not addressed the issue of missing prisoners. Arrests of civil society actors, under the Prevention of Terrorism Act, have continued. Resolution 30/1 called for international judges to investigate alleged war crimes, but Sri Lanka has allowed only for the establishment of a domestic inquiry mechanism.

The positive steps taken by the Sri Lankan government should be a complement to justice and accountability—not a replacement. Those responsible for atrocities must not escape justice.”

TAGS :  News ,   UN Watch ,
Disclaimer: All the comments will be moderated by the AD editorial. Abstain from posting comments that are obscene, defamatory or slanderous. Please avoid outside hyperlinks inside the comment and avoid typing all capitalized comments. Help us delete comments that do not follow these guidelines by flagging them(mouse over a comment and click the flag icon on the right side). Do use these forums to voice your opinions and create healthy discourse.

President says state of emergency will not be extended (English)

President says state of emergency will not be extended (English)