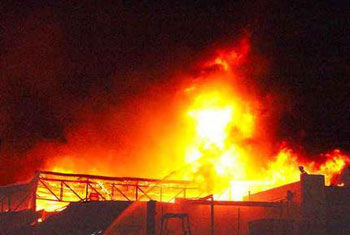 The cause of the fire at the state owned Eppawala phosphate factory was not erupted due to natural causes, the Government Analyst’s Department has stated in its report.

The report has suggested that the fire may have erupted due to the use of an inflammable liquid, an official said.

However, soon after the fire that erupted on July 21, the Chairman of the Lanka Phosphate Limited dismissed allegation that there was a conspiracy behind the fire in a bid to destroy several documents relating to a bribery case.

A section of a building at the Eppawala Phosphate factory premises was destroyed by the fire. The fire has destroyed the building which housed the supply, accounting and documenting divisions of the factory.

TAGS :  News ,   Eppawala ,   fire ,
Disclaimer: All the comments will be moderated by the AD editorial. Abstain from posting comments that are obscene, defamatory or slanderous. Please avoid outside hyperlinks inside the comment and avoid typing all capitalized comments. Help us delete comments that do not follow these guidelines by flagging them(mouse over a comment and click the flag icon on the right side). Do use these forums to voice your opinions and create healthy discourse.