Ms Panambarage Jacinta of Kuliyapitiya, Sri Lanka was named 2020 Foreign Domestic Worker of the Year, an annual accolade for maids in Singapore who have made extraordinary contributions to the family they serve.

The award by the Association of Employment Agencies with a cash price of S$ 2,000 (over Rs 261,000) was given at a Chinese New Year lunch held on 5th February 2020 at the Holiday Inn Singapore Atrium.

The Foreign Domestic Worker of the year is selected based on their extraordinary contribution to the family, the complexity of the job, and the foreign domestic workers commitment to his or her own self-improvement.

Ms Jacintha first arrived in Singapore in 1990 to take care of Mr Lam Yong Sang’s elderly mother and his two daughters: Chen Peng, then 14, and Chen Meng, then 11.

In 2007, she returned to work for the Lam family and played a crucial role in saving the life of Mrs Lam in 2008, when she alerted the family soon after Mrs. Lam showed flu-like symptoms and lost control of her bladder functions, a measure which enabled the family to rush Mrs. Lam to the hospital. Ms. Jacintha who is 58 has served four generations of Lam family.

Mrs Ranhoti Peggilage Padmaseeli of Sri Lanka who has been with her employer since 13th August 1990, also received a merit award at the ceremony. 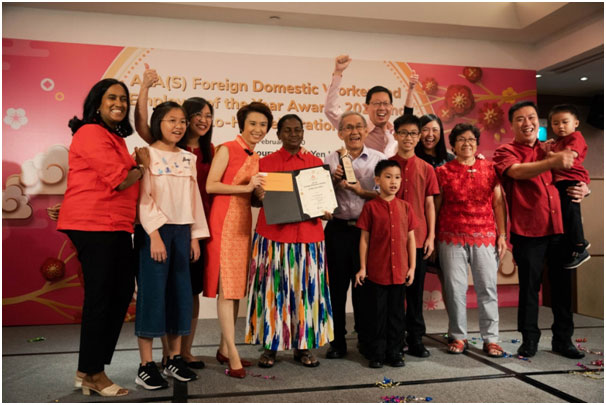