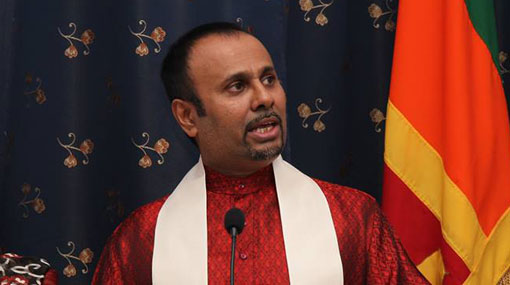 Former Sri Lankan Ambassador to Russia Udayanga Weeratunge has been arrested by the Dubai authorities yesterday (26), according to local media reports.

Dubai authorities had arrested him based on the investigations and submissions made by the FCID, the Senior DIG in charge of the FCID Ravi Waidyalankara was quoted as saying by the state-owned Daily News.

When contacted by Ada Derana, a spokesperson for the Ministry of Foreign Affairs said that they are unaware of the arrest of the former diplomat.

The Police Headquarters also said that so far the arrest has not been reported and that they have not received any official confirmation.

On March 16, the Colombo Fort Magistrate’s Court issued an open warrant for the arrest former diplomat, who is absconding, to be executed through Interpol.

The warrant called for his arrest and to produce the suspect before the court immediately.

Interpol last month issued a Red Notice on the former Sri Lankan Ambassador, as a person wanted by the Sri Lankan authorities.

Mr. Weeratunga had been evading a warrant of arrest issued on 20 October 2016 by a Colombo Magistrate, in relation to investigations pertaining to alleged embezzlement of public funds to the tune of 7.833 million US dollars with regard to procurement of MiG aircraft and money laundering.

On the basis of a Blue Notice obtained by Interpol Sri Lanka on Mr. Weeratunga, Sri Lanka authorities had been working through mutual legal assistance with a number of countries to trace his whereabouts.

The former Ambassador to Russia and Ukraine was intercepted in the UAE on Sunday 4th of February 2018 when he attempted to leave to the United States.

However, he was subsequently released by the UAE authorities, but was prevented from leaving the territory of the UAE until the conclusion of investigations.