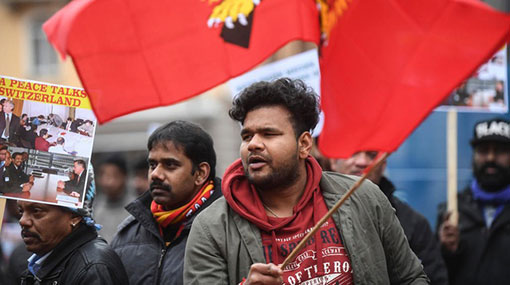 The accused received support from some sections of the Sri Lankan Tamil diaspora in Switzerland. (Keystone)

No jail for Swiss Tamil Tiger financiers: Not enough proof to consider LTTE as a criminal organisation

The Swiss Federal Criminal Court has given no prison terms to alleged financiers of the Sri Lankan Tamil separatist group Liberation Tigers of Tamil Elam (LTTE). The 13 accused were either given suspended custodial sentences or acquitted.

The court on Thursday said accusations of participation in and support of a criminal organisation did not stand and released all of the accused.

It noted that the hierarchical link between the LTTE and WTCC was not sufficiently established. The judges also felt there was not enough concrete proof to consider the LTTE as a criminal organisation.

While the federal prosecutor Juliette Noto had asked for prison terms of between 18 months and six years for the accused, the court did not oblige. Eight of the thirteen on the docks were acquitted of all charges.

The whole process is estimated to have cost close to CHF4 million (4.03 million) which the federal government will have to bear. In addition to this amount, compensation for those acquitted, as well as lawyers’ fees total to almost CHF5 million. The accused will have to pay part of their lawyers’ expenses provided they have the financial means to do so.

During the eight-week trial, which opened in January and closed in March, the federal prosecutor requested sentences of up to six-and-a-half years in prison. The proceedings cost CHF3.8 million ($3.85 million).

The 13 defendants - 12 Tamils or Swiss citizens of Tamil origin plus one German - were accused of participating in or supporting a criminal organisation, fraud, forgery, money laundering and extortion.

Noto cast the Liberation Tigers of Tamil Ealam (LTTE), who are represented in Switzerland by the WTCC, as a violent movement “whose effectiveness inspired Al-Qaeda”. Showing a picture of the WTCC leader behind a machine gun and images of child soldiers, she enumerated the attacks and crimes attributed to the Tamil Tigers. The prosecutor sought to demonstrate the informed involvement of the accused in supporting and funding the LTTE.

In their pleadings, the defence invoked the legitimacy of the Tigers’ struggle against the Sri Lankan government’s repression of the Tamil minority. They argued that the money collected in Switzerland by the accused for the WTCC was mainly used for humanitarian purposes. The defence also challenged the prosecution of the accused at a time when Tiger resistance was collapsing in Sri Lanka.

During the hearings, the accused spoke at length about the repression suffered in Sri Lanka and the atrocities committed by the security forces. They kept silent when asked about their specific involvement.

The Tamil Tigers fought the Sri Lankan government from 1983 until its defeat in 2009. The movement claimed independence from northern Ceylon, populated mostly by Tamils. This conflict caused the death of some 100,000 people.