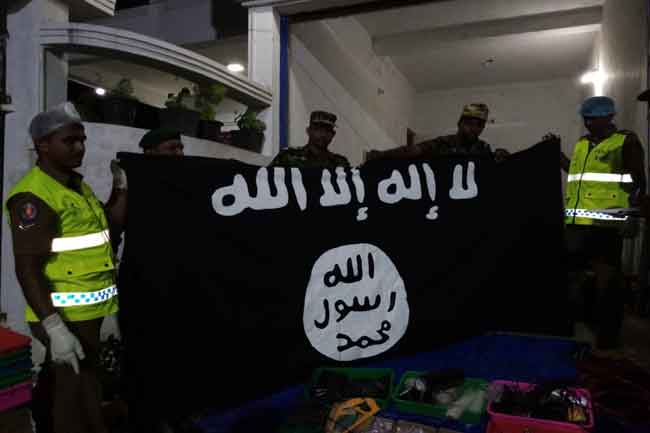 Shootout between STF and armed group during search mission at Kalmunai

UPDATE: (9.30 p.m.) - A curfew has been imposed within Kalmunai, Chavalakade and Samanthurai police areas with immediate effect until further notice, the Police Spokesman said.

Curfew has been imposed in these areas as explosions were reported after police in stormed a suspected bomb factory resulting in a shootout between officers and an armed group operating in Sainthamaruthu.

According to reports the army is also on the scene and the explosion was caused by suspects “blowing themselves up” during the police shootout.

Security forces personnel launched a search operation in the Sainthamaruthu area around two hours back, as the police and the army carry out searches targeting suspects from last weekend’s deadly bombings.

During a search, a stock of explosives and other raw materials used to manufacture bombs. Security personnel seized clothing and flags linked to Islamic State terror group, 150 gelignite sticks, 100,000 iron balls, drones and at least one suicide vest during the raid.

An army spokesman said that during the search mission an explosion was suddenly heard from the direction of Kalmunai and that security forces immediately surrounded that area.

Security forces and the armed group had then exchanged gunfire while it is believed that around 3-6 terrorists could be holed up at that location.

Army soldiers are currently returning fire while the security has been tightened in the area.

A shootout between security forces personnel and an armed group has been reported during a search operation at Sainthamaruthu, Kalmunai in Ampara District, a short while ago.

The shooting had taken place as Police Special Task Force (STF) personnel were engaged in a special search operation in the area.

The Special Task Force had reportedly attempted to raid a house in which terrorist suspects were hiding when they were met with gunfire from its occupants.

It has also been reported that one or two suspects blew themselves up following gunfire with the authorities.

No details of casualties were immediately available.

Police have been conducting raids across the country to find more details about the perpetrators and their supporters.

President Maithripala Sirisena has said police are looking for 140 people believed to have links with the Islamic State group.