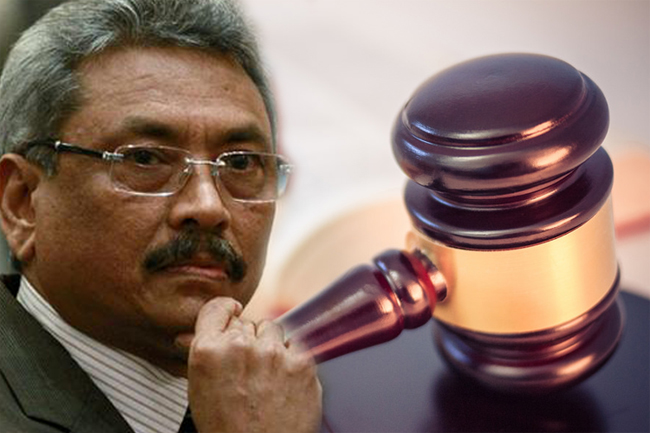 Petition against Gotabayas Lankan citizenship to be taken up in Oct.

The Court of Appeal has decided to support the petition, which was filed this morning (30) against recognizing former Defence Secretary Gotabaya Rajapaksa as a citizen of Sri Lanka, before the three-judge bench on the 2nd of October.

The petition cited the Controller General of the Department of Immigration and Emigration, the Commissioner General of the Department of Registration of Persons, Minister Vajira Abeywardena, Secretary to the Ministry of Internal & Home Affairs and Provincial Councils & Local Government, Opposition Leader Mahinda Rajapaksa, former Defence Secretary Gotabaya Rajapaksa, Acting Inspector General of Police (IGP), Director of the Criminal Investigation Department (CID) and several others as its respondents.

The petitioners allege that Gotabaya Rajapaksa has obtained a passport and a National Identity Card (NIC) claiming that he revoked his US citizenship.

The petitioners further stated that they have the necessary information to prove the former Defence Secretary did not submit proper documentation to verify revocation of his US citizenship when obtaining a Sri Lankan passport and a NIC.

Hence, the petitioners requested the Appeals Court to deliver an order suspending the issuance of a passport and a NIC to Gotabaya Rajapaksa. They have also sought an interim order preventing the functioning of said passport and NIC until the court delivers the petition’s verdict.