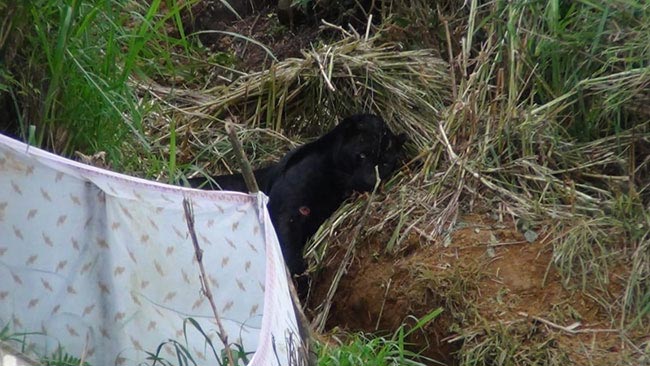 Suspect arrested over setting up trap for rare black panther

A suspect has been arrested in connection with the incident of a rare black panther getting caught in a trap set up in Walamale of Lakshapana Tea Estate within the Nallathanniya Police Division.

A rare black panther was found by wildlife officers, caught in a wire trap near a vegetable cultivation, yesterday (26).

An employee at the vegetable cultivation has been arrested this morning (27) in suspicion of setting up the trap.

The suspect is to be produced at the Hatton Magistrate’s Court today.

According to wildlife officials, the wounded black panther is an 8-year-old well-grown male, about 8 feet in length and 4 feet in height.

The Sri Lankan Panther has been a mystery for many years and sightings throughout recent history have been very rare due to the low population numbers and the solitary nature of the animals.

The Sri Lankan black panther was last seen decades ago when an animal was discovered in a trap in Mawuldeniya, Pitadeniya.

Since then the black panther was thought to be extinct as conservationists have been unable to find any evidence for them in the wild.

However, in January this year extraordinary new footage had emerged showing the sighting of five panthers roaming freely in forests near Adam’s Peak.