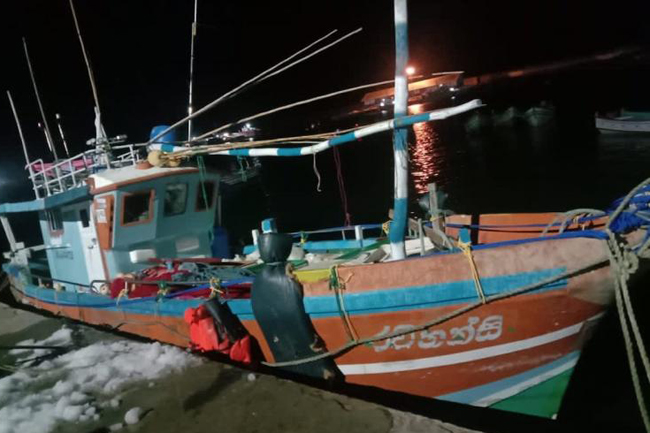 Indian authorities have intercepted a Sri Lankan fishing vessel carrying 300kg of heroin and weapons off the southern coast of the country, Indian media reported.

Six Sri Lankan nationals have also been taken into custody along with the massive heroin consignment.

In addition, five AK-47 rifles and 1,000 rounds of 9mm ammunition were also seized by the Indian officials.

According to reports, the contraband was found in a fishing boat named ‘Ravihansi’ which was intercepted by the Indian Coast Guard off Vizhinjam coast in Kerala on March 25.

In an official statement on Tuesday (March 30), the Narcotics Control Bureau (NCB) of India stated that an unknown vessel which set off from Chabahar Port in Iran had handed over the said heroin and weapons consignment to the Sri Lankan vessel in question, in the high seas near Lakshadweep.

Upon intercepting the Sri Lankan vessel, the Indian Coast Guard had brought it to Vizhinjam harbour. Subsequently, the NCB Chennai Unit has taken over the custody of the board.

Indian media reported that 300.323 kg of heroin along with five AK-47 rifles and 1,000 rounds of 9mm ammunition were found from the seized vessel.

“Image of a flying horse was found on all the heroin packets. It is a usual practice of trafficking syndicates to brand their drugs. All the six Sri Lankan crew members were arrested and remanded to judicial custody,” the release said.

“There have been seizures of huge quantity heroin in the Arabian Sea by both Indian as well as other enforcement agencies which are believed to have trafficked by the same network. This seizure also unveils the nexus between narcotics trafficking and extremist elements,” it further read.

Accordingly, the NCB has widened its probe into the seizure of the said Sri Lankan fishing vessel.

-with inputs from Indian media