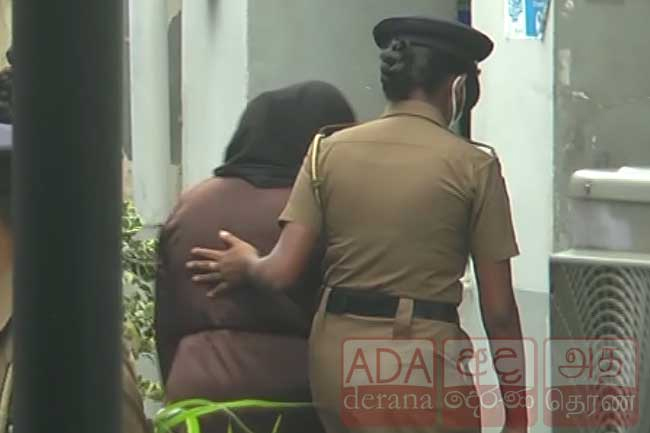 The Colombo Magistrate’s Court today (July 24) granted permission to Kirulapone Police to detain MP Rishad Bathiudeen’s wife who was arrested in connection with the death of an underage domestic aide at the parliamentarian’s private residence.

Accordingly, Shabdeen Aishah, 46, will be interrogated for 48 hours under detention orders.

Meanwhile, the Borella Police has obtained a 48-hour detention order on the lawmaker’s father-in-law Mohamed Shabdeen, brother-in-law and the intermediary who provided child labour to the Bathiudeen family.

The girl, who was residing in the Dayagama area, had been 15 years of age when she was brought to the parliamentarian’s private residence at Bauddhaloka Mawatha for domestic work last October.

Thereby, the former minister’s wife, father-in-law and the middleman in question were taken into custody on Friday morning (July 23) based on the testimonies recorded from nearly 20 individuals, autopsy results and the evidence gathered by the investigating officers which pointed to the fact that the deceased girl was subjected to abuse.

In addition, the 44-year-old brother-in-law of MP Bathiudeen was also taken into custody Friday for allegedly sexually abusing a young woman who worked as a domestic helper at the lawmaker’s official residence from 2015 to 2019.

When the case was taken up today, Deputy Solicitor General Dileepa Peiris called the death of the 16-year-old an absolute tragedy.

He also produced the autopsy results to the magistrate, emphasizing that the child’s cause of death was traumatic shock induced by severe external burns.

The post-mortem reveals that she was sexually abused for a prolonged period of time, the deputy solicitor general stressed.

Statements recorded by the investigators uncovered that the child’s mother had given her away to a middleman to compensate for a loan of Rs. 30,000 obtained from him.

The deputy solicitor general revealed that this child trafficker had supplied 11 minors to various households related to the Bathiudeen family.

Shedding light on the abuse that the deceased child suffered, he said that the child had been given lodging at a 6x4 ft room which was not fitted with a light and was detached from the parliamentarian’s residence.

“It is disappointing to see such an unfortunate event taking place where the head of the household is a member of the legislature,” he remarked, adding that the former minister, too, should be investigated.

The deputy solicitor general pointed out that these events have given rise to serious suspicions as to whether the 16-year-old committed suicide or her life was taken by someone else.

After taking the submissions into account, the additional magistrate allowed the suspects to be detained by the police for 48 hours for questioning and ordered to produce them before the court again on Monday (July 26).