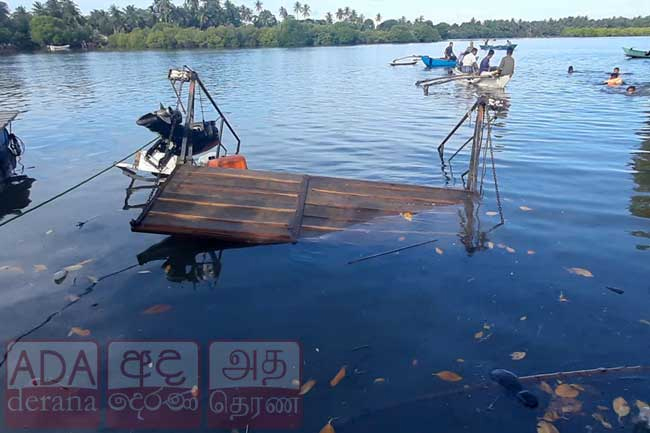 Six including children dead after ferry capsizes in Kinniya

(UPDATED) Six people including three schoolchildren have died while dozens more sustained injuries after a ferry capsized in the Kuringankerni lagoon in Kinniya, Trincomalee at around 7.30 a.m. this morning (November 23), the Police said.

According to reports, a 30-year-old mother, her six-year-old son, a three and a half-year-old girl, two sisters and a 70-year-old man were among the deceased.

In the meantime, the injured were rushed to the Kinniya Base Hospital. A six-year-old girl has been transferred to the Trincomalee Hospital in critical condition and she is currently receiving treatment in the intensive care unit.

The police said the rest of the passengers include five girls, six boys, four women and four men.

The salvage divers of the Navy and the Police launched a joint rescue operation in search of possible missing persons.

The ferry had been transporting a group of children and teachers when it capsized this morning (November 23).

The ferry service had been set up by the Kinniya Urban Council until the construction of the existing Kuringankerni Bridge is completed.

There were complaints from the locals that the ferry service in question was operated sans standards.

It has been revealed that with the launch of construction of the new bridge across the Kuringankerni lagoon during the administration of the Government of Good Governance, the locals opted for a ferry service since the alternative route which stretches over 3 kilometres was considered too long.

According to reports, the chairman of Kinniya Urban Council S.H.M. Naleem had issued a permit to an individual named M.A.M. Riyaz to transport passengers across the Kuringankerni lagoon.

The Kinniya Urban Council is under the Sri Lanka Muslim Congress.

The relevant permit has been issued under the conditions of safe transport of passengers, transport of school children free of charge and assessment of the ferry’s condition from time to time.