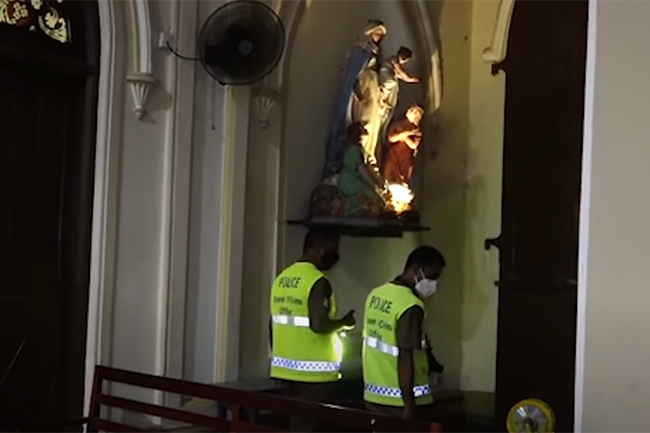 The main suspect involved in setting up a hand grenade inside the All Saints’ Church in Borella has been identified as a 56-year-old who was associated with the church for nearly 16 years.

Following the discovery of the explosive material at around 4.40 p.m. on Jan. 11, four suspects in total were taken into custody over the incident.

According to the police spokesman SSP Nihal Thalduwa, the hand grenade had been placed using sellotape, matchsticks, and incense sticks for it to catch fire and explode.

Investigations have uncovered that the suspects had used a 13-year-old boy, who resides close to the church and frequents the premises, to place the hand grenade inside the church.

Reportedly, the main suspect had been serving the church and residing at the premises over the past nine months.

The investigators have managed to find parts of sellotape, matchsticks and incense sticks, which were used to set up the hand grenade, inside his living quarters.

The police are yet to uncover the reason for the suspect to place an explosive material inside the church, how he managed to obtain it and the individuals who aided and abetted him.

The hand grenade was diffused by the Police Special Task Force (STF) officials last evening, acting on a court order.

Further investigations into the incident are carried out by the Colombo Crimes Division (CCD).

The arrestees are expected to be detained for further interrogations.

The CCD officers have recorded a statement from the 13-year-old boy in quesiton, after producing him before the Aluthkade Magistrate’s Court.