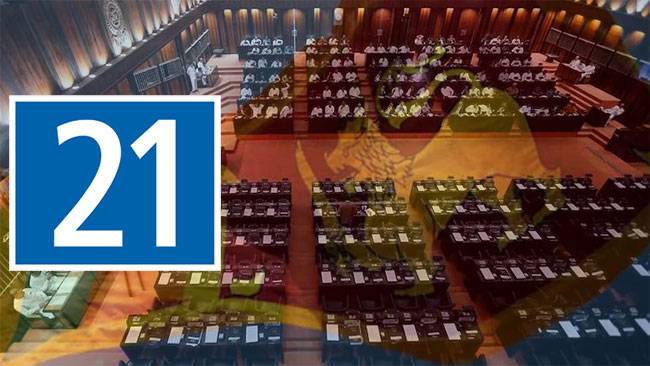 The 21st Amendment to the Constitution has received the approval of the Cabinet of Ministers today (20), according to Minister Harin Fernando.

In a twitter message, he said that draft constitutional amendment was tabled and passed by the Cabinet and that it will be tabled in parliament soon.

The Minister also expressed his gratitude to Prime Minister Ranil Wickremesinghe and the Minister of Justice, Prison Affairs and Constitutional Reforms Dr. Wijeyadasa Rajapakshe for pushing it through.

The draft proposal was expected to be discussed once again and a final decision reached at the weekly cabinet meeting this evening, after its approval had been delayed several times.

Following last week’s cabinet meeting, the Justice Minister has said the Cabinet had not green-lighted the constitutional amendments as it was decided that further educating the political party leaders in this regard was necessary.

Thereby, several political party leaders were expected to be informed in detail with regard to the 21st Amendment.

He had said that the draft of the amendment will be gazetted after receiving the approval of the Cabinet.

The 21st Amendment was initially tabled in the Cabinet on June 06 by Minister Wijeyadasa Rajapakshe and the discussion on it had been adjourned until last week.

The 21st Amendment is expected to empower Parliament over the executive president and annul the 20A to the Constitution, which had given unfetted unfettered powers to President after abolishing the 19th Amendment.

The 21 amendment was tabled and passed in cabinet today and will be tabled in @ParliamentLK soon. Like to thank @RW_UNP and @wijerajapakshe for pushing it through