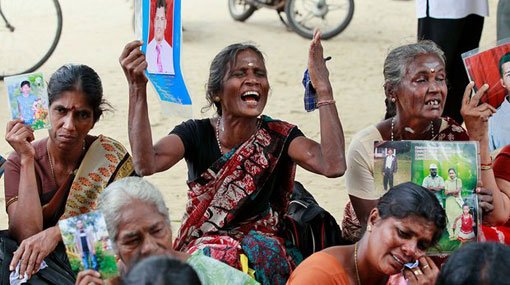 Sri Lanka to recognise thousands of war missing as dead

Sri Lanka announced on Tuesday a landmark law to recognise as dead an estimated 65,000 people still missing seven years after the end of a bitter civil war, allowing relatives to claim inheritances.

Ministers approved a draft bill to issue “certificates of absence” to the families of those who went missing during a 37-year war with the LTTE and a Marxist uprising.

“This measure will help tens of thousands of Sri Lankans whose family members and loved ones are missing and who are unable to address practical issues relating to their disappearance,” the foreign ministry said in a statement.

Under the current law, families cannot access the property, bank accounts or inheritances left by missing relatives unless they can conclusively prove they are dead — an often impossible task.

Several mass graves containing skeletal remains have been found in the past two decades, but only a handful have ever been identified.