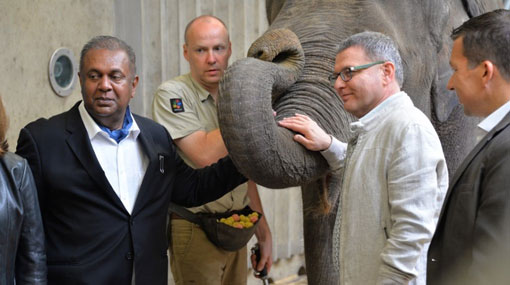 Sri Lanka to to strengthen relations with Czech Republic

The Foreign Ministry in a statement said, “Minister Samaraweera explained the main agenda of Sri Lanka’s National Unity Government, which includes strengthening democracy, fostering reconciliation, ensuring socio-economic development and sustainable peace. Minister Zaoralek welcomed the positive developments in Sri Lanka following the Presidential and Parliamentary elections in 2015, and reiterated the Czech Government’s fullest support for  ongoing efforts to strengthen democracy, promote reconciliation and , re-engaging the international community.  Minister Samaraweera invited Minister Zaoralek to visit Sri Lanka in 2017 which would mark the 60th anniversary of the establishment of diplomatic relations between the two countries.

Minister Samaraweera also handed over to his counterpart, an invitation from President Maithripala Sirisena to the President of the Czech Republic, Milos Zeman to visit Sri Lanka. Recalling the invaluable support extended by the Czech Republic during the conflict years in Sri Lanka, the Minister expressed appreciation for the generous support extended during the recent floods.

Demonstrating the commitment on both sides to revitalize and advance the bilateral economic agenda, an agreement on Mutual Cooperation between the Ministry of Industry and Trade of the Czech Republic and the Ministry of Economic Development in Sri Lanka was initialed in the presence of Minister Samaraweera and Czech Republic’s Deputy Trade Minister Slukova. The Foreign Minister also attended a breakfast meeting with representatives of leading Czech companies and had meetings with the Chairman of the Foreign Affairs Committee of the Chamber of Deputies of the Czech Parliament and senior Government officials in the Czech Senate on 9 June  and the Deputy Minister of Defence on 10 June.

On 11 June, the Foreign Minister attended the christening of the Sri Lankan origin baby elephant at the Prague Zoo  as Chief Guest. The baby elephant  born in the Prague Zoo on 5 April 2016, was christened Maximilian (Max) to honour of a gift of a Sri Lankan elephant in the 1550s to the Habsburg Archduke Maximilian II (later King of Bohemia, King of Hungary, and the Holy Roman Emperor).