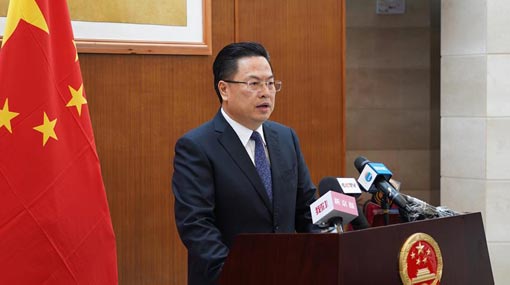 China to work with Lanka to oppose US trade bullying

According to the Chinese Ambassador to Sri Lanka Cheng Xueyuan, China is willing to work with all countries including Sri Lanka in order to fight the trade bullying carried out by the United States of America.

Issuing a statement on the trade dispute between the Republic of China and United States of America, the Ambassador stated that China is ready to work with all countries, including Sri Lanka, to firmly oppose trade bullying, safeguard and promote the building of an open world economy and economic globalization, inject more certainty into an uncertain world, and build a community of shared future and common interests through win-win cooperation.

The Ambassador says that the US tariff increase in China has reduced the total trade volume between China and the US, but the bilateral trade deficit remains basically unchanged.

While American and Chinese consumers are both victims of the trade war, clearly the average American consumers will suffer more, read the statement.

“First, American importers bear almost all the costs of higher tariffs. Some of the cost of tariffs would be passed on to US consumers, while importers see lower margins. Further tariff increases may foreseeably be passed on to consumers. This phenomenon will inevitably lead to inflation in the long run, which will cause more serious damage to low-income families in the United States.”

With all China-US trade taken into consideration, a trade war between the two countries is expected to, reduce global GDP by one-third of a percentage point, half of which is caused by lower business and market confidence, as per a report of the IMF, he further pointed out.

Stating that China has always exercised great restraint and made careful preparations for negotiations with great sincerity as for the China-US economic and trade frictions, the Ambassador says that China is unlikely to trade principled issues for core interests, and will not make concessions on major issues of principle.