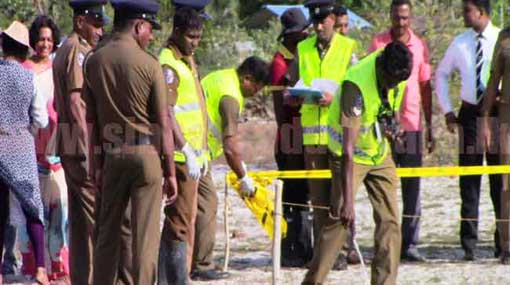 Suspect linked to constables murder attempts suicide while in custody

A suspect arrested in connection with the murder of a police constable, who was reported missing in 2008, has attempted to commit suicide while he was held in the custody of Batticaloa Police.

The 34-year-old suspect named Chandran Subramaniam alias ‘Lingam’ had consumed toilet cleaning liquid inside the washroom of the police station yesterday (11), in an attempt to take his own life.

The police constable in question had reportedly gone missing on 27th July 2008 and was buried by the perpetrators after he was murdered, the Police Media Spokesperson SP Ruwan Gunasekara said.

The police constable in question, Nagarasa Prashanth, is a 23-year-old attached to Kokkadichcholai police station.

On the 1st of August 2008, his father had lodged a complaint at the Kattankudy police station with regard to his disappearance.

The officers of the Criminal Investigation Department (CID) had received information pertaining to the disappearance of this constable while probing the double murder of two police officers at the checkpoint in Vavunativu in late November last year.

Further investigations into the constable’s disappearance had unveiled that he was shot dead and later buried by the perpetrators.

The CID had made three arrests with regard to the murder. Accordingly, two suspects were arrested on 28th March this year; one of the arrestees, named Muttu Selvarasa, is a 32-year-old alias ‘Madan’ residing in Batticaloa. The other arrestee is Chandran Subramaniam, the suspect who had made a suicide attempt at the Batticaloa police station yesterday. He is said to be a resident of Valaichchenai area.

The third suspect in the case was arrested by the CID on the 4th of April. The 38-year-old named Mary Antony Ajanthan Deepam is also a resident of Batticaloa area.

Interrogations into these suspects have uncovered that the police constable was shot to death and buried afterwards.

Based on the information obtained from the suspects, the investigators had located the place in which the constable was reportedly buried. As per the order received from the Batticaloa Magistrate’s Court, the officers had excavated the location, however, no bone fragments belonging to the murdered constable were found there.

The excavation was led under the instructions of the Batticaloa Magistrate and the judicial medical officer, the police spokesperson stated. The said location is reportedly in the proximity of Kokkadichcholai cemetery.

It is reported that Chandran Subramaniam had attempted to commit suicide after the investigators carried out excavations to recover the murdered constable’s remains.