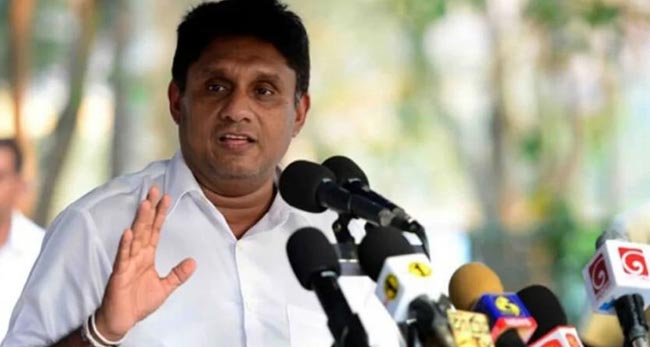 UNP Deputy Leader and Minister Sajith Premadasa says that although some internal crisis are seen inside the United National Party (UNP) to those who are not well-versed in democracy, it is really the party exercising true democracy.

He said that the freedom to have different opinions is a symbol of democracy and, points out that such opinions are shunned down only in an authoritarian regime.

Minister Premadasa who participated in the Enterprise Sri Lanka exhibition on Monday (09) as the chief guest spoke at the media briefing held at Mutraveli ground in Jaffna.

The Minister further stated that on his way to this exhibition venue, many people asked him various questions about the Tamil people’s issue. “My stance is not to say one thing when go abroad and make a contradictory statement after returning to the country.”

“We had certain leaders who went to India and stated 13 Plus and having returned home turned it to 13 minus. My stance is to solve this issue through maximum devolution of power within a unitary state.”

“But I should reiterate one important point. This issue could be solved only by the empowerment of political, economic and social issues,” he said.

Premadasa said that if anybody belongs to any racial community feels that he or she is a second class citizen or, they are inferior to that of the other communities, the solution that we talk about would not be found.

He said that Provincial Councils were introduced as a solution to this issue, but it was not implemented fully. “However, the 13th Amendment has become a joke today. Therefore, we should strengthen the Provincial Council system.”

He said their stance is clearly announced in the policy statement publicized before the Presidential election in 2015 that is maximum devolution of power within a unitary state. “There is no change in that stance even today,” he stressed.

He also said that certain factions are attempting to emphasize that there is a division within the UNP with regard to nominating its presidential candidate.

“Of course, those who are not familiar with the word ‘Democracy’ could see this situation as an internal crisis within the party. But democracy means itself the freedom to have different opinions.

“There are certain political parties that do not tolerate diverse opinions. Because the way for such opinions has been controlled inside such parties”, the minister said.