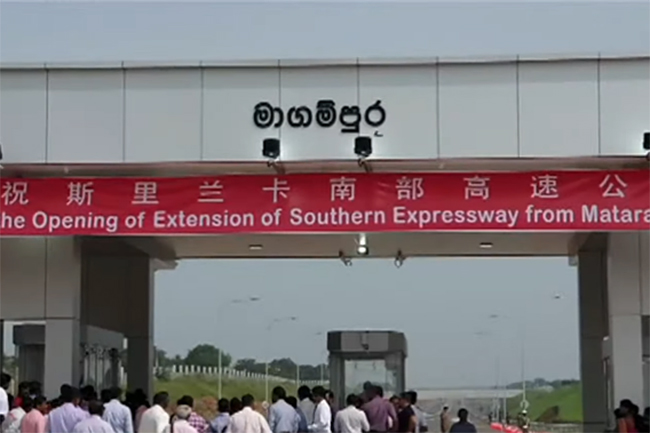 Another phase of the Southern Expressway, which spans from Matara to Mattala and Hambantota, was vested with the public yesterday (07), while the third phase of the Outer Circular Road from Kadawatha to Kerawalapitiya was also declared open.

The first event took place under the patronage of Secretary to the Ministry of Highways & Road Development and Petroleum Resources Development Sunil Hettiarachchi and the Chairman of the Road Development of Authority (RDA) Nihal Sooriyarachchi while the latter was held under the auspices of Prime Minister Ranil Wickremesinghe.

Despite the new sections of the expressway being available for the public from midnight tonight, residents of the area alleged the openings were done prematurely, with construction work yet to be completed.

A protest rally organized by the people of Galagahaduwa, Kerawalapitiya charged that the construction work is incomplete. They also claimed, since byroads are not constructed yet, people living in the area are forced to jump over mounds of earth accumulated on the roadside.

The third phase of the Outer Circular Road, which links the Southern Expressway and the Katunayake Expressway, is a 9.6km stretch of road spanning from Kadawatha to Kerawalapitiya.

Meanwhile, despite a section of the Southern Expressway’s extension from Matara to Hambantota being unveiled, the locals and public representatives charged that the opening was premature.

A section from Barawakumbura to Mattala via Andarawewa which is a 21.8km stretch and a 16.6km stretch from Andarawewa to Hambantota were accordingly declared open.

The Executive Director of the Buddhist Information centre Venerable Agulugalle Jinananda Thera yesterday lodged a complaint with the Election Commission pertaining to the unveilings.

In the meantime, the Directive Authority of the RDA said the newly declared open Expressway stretches will be opened to vehicular traffic starting from midnight today (08).

The RDA noted that there will not be any Electronic Toll Collection (ETC) facility at the Kerawalapitiya Interchange until further notice.